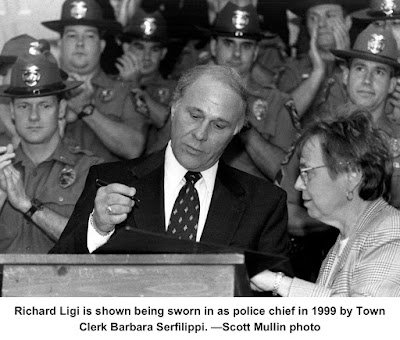 Richard Ligi:
Youth and the Chief
For Richard Ligi, working for the Ridgefield Police was virtually a lifetime affair. He  joined the department in 1967 as a clerk, too young even to carry a gun. He wound up being its fourth chief.
A Ridgefield native, Richard Joseph Ligi was born in 1947, attended the town’s schools, and was a 1965 graduate of Ridgefield High School. Although his father, Navio, was a well-known baseball player in his day and he himself became a popular youth baseball coach, Ligi did not play baseball in high school and instead worked after school at Wayside Market to earn money to go to college.
He went to Post College in Waterbury, majoring in business, and in 1967, got a job as the civilian clerk for the Ridgefield Police Department, then housed in the basement of the town hall. “That piqued my interest in police work,” he said in a 1999 interview.
While working at the department, he continued his college studies,  juggling that with service in the Connecticut National Guard.  He became an auxiliary policeman — able to do traffic details — in 1968. But it wasn’t until 1969, after he had turned 21 and was able to carry a gun, that he was sworn in as a full-time police officer. One of the few on the department to hold a college degree at the time, he had also graduated first in his class of 30 at the Connecticut Police Academy.
From there promotions came steadily: to sergeant in 1977, lieutenant in 1980, captain in 1990, and major in 1996. When Chief Thomas Rotunda retired in 1999, the Police Commission unanimously chose Major Ligi as the town’s fourth police chief, the second one to be a native son, and the only one whose entire working career was spent in the department.
Chief Ligi was especially noted and praised for his involvement with youth. He coached sports 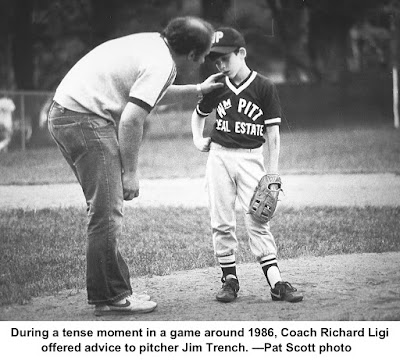 teams, and helped develop anti-drinking and drug programs such as Party Patrols and Cops and Shops; the former cracked down on “keg parties” and the latter uses underground police as liquor store clerks.

He knew first-hand the tragedy that can come from drinking and driving. His son, Rick, a student at the University of Rhode Island, was one of two young men killed when the car in which they were passengers crashed on North Street in 1995. The 19-year-old driver had drunk six cans of beer before the accident; he spent two and a half years in prison.
Rick Ligi had been a star pitcher at URI which, for many years, has presented the Rick Ligi MVP Award to its top players. His baseball number 8 at URI was retired after his death. In Ridgefield, Chief Ligi and his wife, Dale Tulipani Ligi, established the Rick Ligi Memorial Scholarship,  presented annually to a Ridgefield High School senior baseball player going to college.
Ligi also worked to improve how youth viewed the police. He expanded the involvement of the youth officer in the schools and their students, and proposed the “school resource officer” who could work with kids at the high school daily.
“Relationships create better rapport, and that rapport may help kids better understand what we’re doing,” Ligi said.
Ligi’s work with young people began in the 1980s when he coached Little League teams. He went on to coach Babe Ruth baseball, Nutmeg Games teams, and the Nighthawks, a summer baseball league team for high school and college kids.  His Nutmeg Games teams were 18-0 over the years and won three gold medals; the Nighthawks teams won the regionals and got to the sectionals twice.
“He just had a lot of respect for the kids,” said Tony Pisano, who helped coach the Nighthawks. “He made sure everybody played and he knew all of the kids and what were their strengths. That's what made the team successful. He was all about everybody; it was the whole team all the time. I'm sure he did the same thing with the police department.”
Ligi died of a stroke in 2008. He was only 60 years old. His funeral at St. Mary’s was so crowded that more than 100 people had to listen to the service outdoors.
“We can call him ‘the just man’,” Msgr. Laurence Bronkiewicz said, referring to one of the readings during the funeral Mass. “His whole life was devoted to justice.”
"His dedication to his work was phenomenal," said John Roche, who succeeded Ligi as chief. "He just loved to come to work.
"He was proud of his men, that's what he was proudest of — to see them do a good job and contribute to the community."


Longtime friends like Chip Landon admired Ligi's quick wit, often served up with a grin, though sometimes he preferred the deadpan approach. “He was thinking all the time,” Landon told The Ridgefield Press, “whether to help you out with a problem or to give you a zinger.”