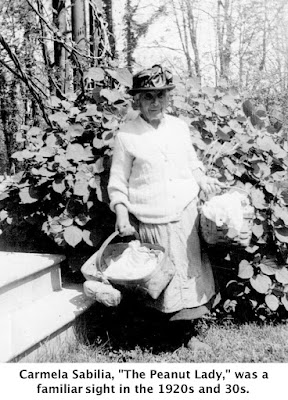 Carmela Sabilia:
The Peanut Lady
Few Ridgefielders in the 1920s and 30s knew the name Carmela Sabilia but, as Dom D’Addario once observed, “everyone knew The Peanut Lady.”
Mrs. Sabilia lived in Georgetown with her grocer husband, Louis, and by 5 a.m. each Sunday, she’d be up roasting peanuts over a wood fire. She’d package them in bags, put them in two baskets and be off on a 13-mile walk that took her through Branchville and up the long, four-mile hill to Ridgefield village, selling her bags of peanuts along the way at 10 cents each.
“She always wore a hat and two or three layers of coats or jackets,” said D’Addario, who had been a child in Branchville at the time.
Carmela Catmo was born in 1859 in Italy and was in her late 30s when she came to the United States in 1898. Not long after her arrival, she married Joseph Sabilia, a Connecticut native of Italian parents, who was a year older. By 1910, she had a young son and was working as a “sales lady” for her husband’s “fruit store” in Georgetown,  according to the U.S. Census that year. The store was “Sabilia’s Groceries, Fruits & Vegetables, Ice Cream & Candy,” and she was known to the locals as “Mamma Joe.”
By the 1920s, she was doing her peanut route and was probably in her late 70s before she stopped her weekly treks.
“She was, as it were, the walking forerunner to the Good Humor truck, given her popularity with the children and the distances she traveled, as far as Ridgefield,” said Wilbur Thompson and Brent Colley, Georgetown historians.  “Mamma Joe used old orange crates to roast peanuts over. She roasted them right on the side of the road. Then she put them in small paper bags and walked (sometimes rode on horseback) the roads of Branchville, Georgetown, Redding selling them.”
While Sabilia reportedly spoke little English, she was wise in the ways of American business. According to Thompson and Colley, “The peanut business was profitable and about once a week, she would travel to the savings bank to make a deposit.
“Like many women of that period, especially Italians, she wore about 6 layers of skirts with pockets in each. In the bank she pulled up about 4 layers of skirts, found the money and savings booklet, made the deposit, and then buried the booklet back in her layers.”
When she died in 1943, she reportedly left a small fortune.