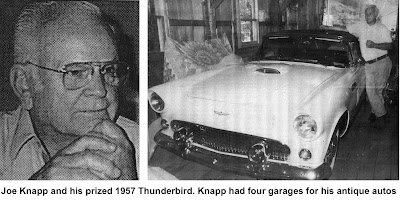 Joseph Knapp:
Overcoming Adversity
As a young man, Joe Knapp had two strikes against him: poverty and a severe war injury. He overcame both to become a successful local businessman and a nationally recognized antique car collector.
Joseph Lewis Knapp was born in 1929, the sixth of 10 children, and grew up during the Depression. His family was poor and, to earn money to help with their support, he dropped out of Ridgefield High School in the 10th grade. Only 16 years old, he lied about his age and enlisted in the Merchant Marine for some guaranteed pay and “so he could be assured of three meals a day,” son Darin said. When his age was discovered, he was sent home.
He then worked as a caretaker on large estates and also as a janitor at the Ridgefield Playhouse on Prospect Street; he had to walk three miles each way to that job. In 1974, he was a founder and member of Board of Directors of Village Bank and Trust Company, located in the old Playhouse building whose floors he used to sweep. When the Village Bank board decided to sell to Webster Bank in 1998, Knapp was opposed. He wanted it to remain a hometown bank. (In 2012, the old Playhouse/bank building was demolished to make way for the Prospector, a theater imitating the old Playhouse’s design.)
When the Korean War broke out, Knapp joined the Army. He won two Bronze Stars as a combat engineer. He was severely injured when a large Army truck crashed into his tent, running over his legs and killing a fellow soldier while they were sleeping. Although the doctor treating him thought he might never walk again, Knapp overcame the injuries and wound up being able to walk with only a slight limp. 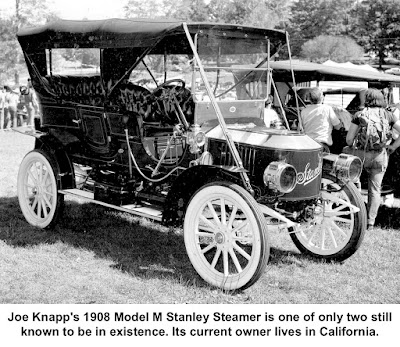 After the war, he and his brother, Bob, started a lawn care, landscaping and tree care business, which grew into one of the region’s largest tree companies. In 1954, they had one tree crew. By 1980, Knapp Bros. Inc. tree surgeons had two dozen crews working throughout  southwestern Connecticut, often on jobs for CL&P or SNET.
Both his business success and some smart investments — such as turning $3,000 invested in commodities into $100,000 in 1971 — allowed Knapp to pursue his favorite hobby: Antique automobiles. By the 1990s, he had four garages filled with old cars. A specialty was Stanley Steamers and he owned a 1908 Stanley Steamer Model M, which was one of only two now in existence. He also restored a 1914 Model 606 Roadster.
The Stanleys were capable of traveling more than 60 mph and Knapp would take his onto I-84 for rides — much to the amazement and sometimes concern of other motorists who thought his very old car was on fire. “These people don’t realize what a steam car does,” he said. “It’s a very tricky ordeal to get it going, but it rolls along so nicely with just a ‘puff puff.’ It’s so effortless.
Other favorites in his collection were a 1936 Buick Special convertible, and a 1957 Thunderbird, which he would drive to Florida. “It can do 130 mph,” he told an interviewer in 1990. “It has a 312 dressed up engine and is weighted, balanced and blueprinted. I use it all the time and have a picture of it in front of Disneyworld.”
He loved old cars. “What I see when I look at a car is the preservation of our heritage,” he said. “If collectors didn’t feel this way, these cars would be pieces of junk under the earth.”
Knapp was active in the Lions Club — which for years sponsored an antique car show in town — and other community organizations.
During his life, Knapp battled not only his war injuries, but cancer. At 60, he was diagnosed with colon cancer and had to undergo chemotherapy and radiation. He also used homeopathic medicines. “He was an advocate of natural medicine and believed in the power of mind over body,” said a profile of him in 2000, the year he died. At 66, he was found to have prostate cancer, but “he did not die of cancer,” said his son, Darin. “He died of a heart attack.” He was 71 years old.
Joe Knapp and his wife, June, had six children, all with five-letter names beginning with D: David, Daryl, Darin, Dayle, Darcy and Dawne. “My mother just wanted it that way, and she was great with names,” Darin said.