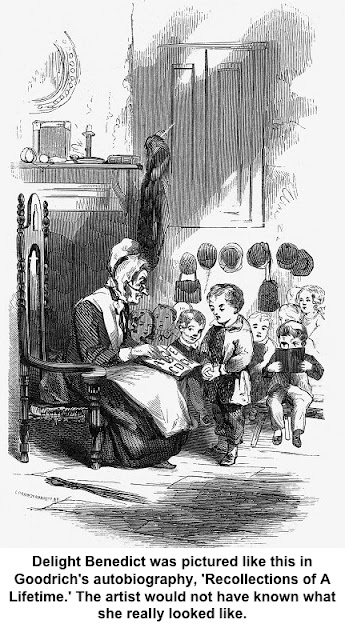 Delight Benedict:
Teaching the ABCs
Hundreds of teachers in Ridgefield have been remembered in dozens of ways, but few have got quite the strange notoriety of a woman named Delight Benedict — or, as Samuel G. Goodrich called her, “Aunt Delight Benedict.”
Delight Benedict taught at the West Lane Schoolhouse, which is today a historical museum at the intersection of Route 35, West Lane, and South Salem Road (it’s open the last Sunday of the month in warm months).
Benedict gained a good degree of posthumous fame in the 19th Century when  Goodrich, who wrote more than 100 books under the name of Peter Parley, described her in his 1856 autobiography, "Recollections of A Lifetime":
“I was about six years old when I first went to school,” Goodrich wrote. “My teacher was Aunt Delight, that is, Delight Benedict, a maiden lady of 50, short and bent, of sallow complexion and solemn aspect.
“I remember the first day with perfect distinctness. I went alone — for I was familiar with the road, it being that which passed by our old house. I carried a little basket, with bread and butter within, for my dinner, the same being covered over with a white cloth. ...
“I think we had 17 scholars — boys and girls — mostly of my own age...
“The school being organized, we were all seated upon benches, made of what were called slabs — that is, boards having the exterior or rounded part of the log on one side: As they were useless for other purposes, these were converted into school-benches, the rounded part down. They had each four supports, consisting of straddling wooden legs, set into auger-holes. Our own legs swayed in the air, for they were too short to touch the floor.
“Oh, what an awe fell over men, when we were all seated and silence reigned around!
“The children were called up, one by one, to Aunt Delight, who sat on a low chair, and required each, as a preliminary, to make his manners, consisting of a small sudden nod or jerk of the head. She then placed the spelling-book — which was Dilworth's — before the pupil, and with a buckhandled penknife pointed, one by one, to the letters of the alphabet, saying, ‘What's that?’
“If the child knew his letters, the ‘what's that?’ very soon ran on thus:
" 'What's that?'
" 'A.'
" ''Stha-a-t?'
" 'B.'
" ''Sna-a-a-t?"
" 'C.'
" ''Sna-a-a-t?'
" 'D.'
" ''Sna-a-a-t?'
" 'E.'" &c.
"I looked upon these operations with intense curiosity and no small respect, until my own turn came. I went up to the school-mistress with some emotion, and when she said, rather spitefully, as I 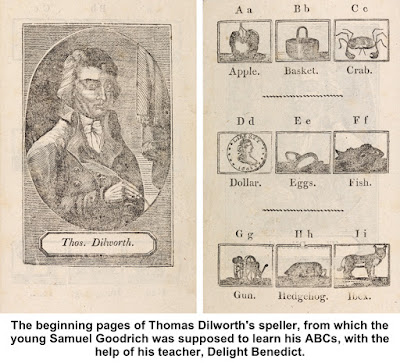 thought, ‘Make your obeisance!’ my little intellects all fled away, and I did nothing.

“Having waited a second, gazing at me with indignation, she laid her hand on the top of my head, and gave it a jerk which made my teeth clash.
“I believe I bit my tongue a little; at all events, my sense of dignity was offended, and when she pointed to A, and asked what it was, it swam before me dim and hazy, and as big as a full moon. She repeated the question, but I was doggedly silent. Again, a third time, she said, ‘What's that?’
“I replied. ‘Why don’t you tell what it is? I didn’t come here to learn you your letters!’”
Goodrich said he himself had no recollection  of his confrontation with his teacher, but he said that “Aunt Delight affirmed it to be a fact.”
That same night Benedict paid a visit to the home of Goodrich’s parents. She “recounted to their astonished ears this, my awful contempt of authority. My father, after hearing the story, got up and went away; but my mother, who was a careful disciplinarian, told me not to do so again!
“I always had a suspicion that both of them smiled on one side of their faces, even while they seemed to sympathize with the old petticoat and pen-knife pedagogue, on the other; still I do not affirm it; for I am bound to say, of both my parents, that I never knew them, even in trifles, say one thing while they meant another.”
Goodrich’s father was the Rev. S. G. Goodrich, minister of the First Congregational Church, and his mother, Elizabeth Ely Goodrich, was a member of a prominent family in Connecticut.
Delight Benedict was born in Ridgefield in 1759, only a few years after the first West Lane schoolhouse was built. She was one of six children of John and Esther Stebbins Benedict. John 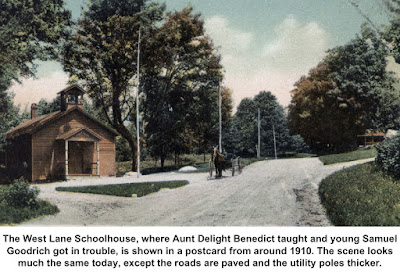 Benedict was a well-educated Ridgefielder, a 1747 graduate of Yale and a deacon of the Congregational Church. (Rev. Goodrich was a fellow Yalie.)  His wife was a member of one of the founding families of the town.

Delight Benedict was one of the very few teachers that Goodrich mentions in his 1,100-page, two-volume “Recollections of A Lifetime,” and he always paints a cold, unflattering picture of the woman. “She, not being a beauty, was never married, and hence, having no children of her own, she combed and crammed the heads of other people’s children,” he writes at one point. “In this way she was eminently useful in her day and generation.”
Delight Benedict’s five siblings all lived longer lives than she did. Even both of her parents survived her when she died in 1812 at the age of 51.
Goodrich was not a fan of the system that provided his earliest education — he may have learned more from his sophisticated parents than he did at West Lane schoolhouse — and he credited much of his best education to reading. What’s more, it was probably to counteract the kind of cold, boring schoolhouse instruction often provided in the 18th and 19th Centuries that prompted him to produce more than 100 books, most of them aimed at children and many of them designed to be textbooks. Instead of dispensing cold, hard facts, the pages of Peter Parley books talked directly to the children in a friendly fashion, and featured many illustrations to arouse their interest and explain their subjects.