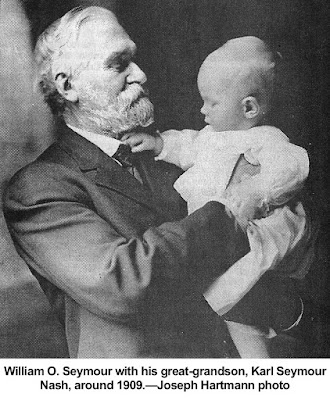 William O. Seymour:
Bridges and Oil for the Waters
William O. Seymour was one of Ridgefield’s leading citizens at the turn of the 20th Century, so perhaps the Ridgefield Press obituary writer was a bit flustered by Seymour’s importance when he wrote on the front page Jan. 26, 1911: “He was a man among men, a consistent Christian, a good citizen, one of the few whom our town could afford to lose.”
A man known for his calm and warm demeanor, Seymour might have smiled at the gaffe.
Born in 1833 in Ridgefield, William Oscar Seymour got his early education in local schoolhouses. He then attended the Amenia (N.Y.) Seminary, a Methodist secondary school that was well respected and produced several university presidents and bishops.
Seymour returned to Ridgefield to become a grammar school teacher, but seeing the need for a “high school” in town, established the High Ridge Institute in the late 1850s. Seymour’s school, which had both boarding and day students, served up to 40 boys. At the time Seymour lived in the “Peter Parley house” — the childhood home of author Samuel G. Goodrich — on High Ridge, from which he also ran the school.
By 1869, Seymour was looking at an entirely new career:  civil engineering, a subject he had previously taught to young men. Railroads were expanding at a rapid rate. Before 1871, about 45,000 miles of track had been laid in the United States. Between 1871 and 1900, another 170,000 miles were added. Seymour saw an opportunity not only for profitable work but perhaps also for adventure.
In 1873, he began working for the New York, New Haven and Hartford Railroad, which at the 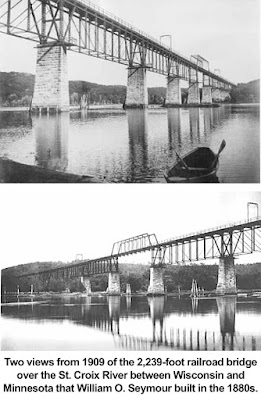 time was the largest road in New England. He started out as a “rodman” — a menial job involving carrying and holding a rod used during the process of surveying for a new line. By 1877, he was the railroad’s chief engineer.

He left in 1881 to join a Massachusetts railroad, but soon decided to head west. He spent nearly five years designing and building railroads for the Wisconsin Central in Illinois, Wisconsin and Minnesota. His projects included building a 104-mile line from Chippewa Falls, Wisc., to St. Paul, Minn, crossing the St. Croix River with a 2,239-foot long iron bridge on stone abutments (years later the bridge was later abandoned but the abutments still stand in the river). Another line he built ran 124 miles from Chicago, Ill., to Schleisingerville, Wisc.
In 1887, Seymour returned to his home town where Gov. Phineas Lounsbury, a fellow Ridgefielder, appointed him one of the state’s three railroad commissioners — a post of considerable importance in that era when the state was served by more than two dozen railroads and streetcar companies. He remained a commissioner until his death 24 years later.
He was also a leading citizen in local government, serving as a probate judge, a state representative, a borough warden, and a member of the Board of Estimate (predecessor to the Board of Finance),  He was vice-president of the First National Bank of Ridgefield, which he helped found in 1900.
In 1908, Seymour was chairman of the town’s Bicentennial celebration, which included a parade, speeches, other special events, and the publication of a book that offered many pictures of 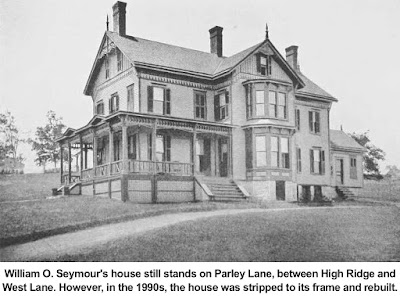 people and places of Ridgefield along with essays about the town. Fifty years later, Seymour’s great-grandson, Ridgefield Press publisher Karl Seymour Nash, was chairman of the town’s 250th anniversary celebration.

When he had returned to Ridgefield, Seymour built a sizable house on Parley Lane, just down the hill a few hundred feet from the Peter Parley house he had earlier owned.  The house is still standing, though it underwent a major rebuilding and expansion in the 1990s.


William O. Seymour was 77 years old when he died. Writing the next week from Montreal, where he was a consular official, historian George L. Rockwell said in a tribute to Seymour : “The welfare of the town was always uppermost with him. Office sought him and not he the office. In public meetings, when debate at times waxed to the point of bitterness, with a few chosen words would he pour oil upon the troubled waters.”