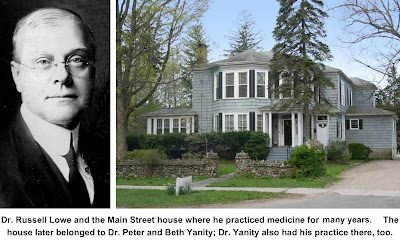 Dr. Russell Lowe:
A Physician and A Power
Russell Lowe was no ordinary local doctor. The physician practiced more than a half century in Ridgefield but was involved in many aspects of community life, including government. Although he never held an elective office, Lowe was among the handful of leading citizens who were always looked to for advice on running the town.
Russell Walter Lowe (pronounced to rhyme with “cow”) was born 1866 in Oneida, N.Y., where he grew up and attended local schools. He graduated from New York University medical school in 1889 at the age of 21, the youngest in his class. By 1893, he had arrived in Ridgefield where he practiced for 53 years. The only break was for service in the Army  in World War I. As a captain in the Medical Corps, he treated soldiers at several camps in the South and was then assigned to the Surgeon General’s Office in Washington D.C.
Dr. Lowe was named the town health officer in 1893 and kept that job most of his career. “He has been very diligent in his duties, ever striving to maintain the high standard of health for which the town of Ridgefield is famed,” wrote George L. Rockwell in his 1927 “History of Ridgefield.”
For most of his years here, he was also the medical examiner and the school physician — he was largely responsible for instituting medical examinations for school children.  In 1897 he was named “special physician” to the Ridgefield Volunteer Fire Department.
For his first 25 years, he had his practice in the building at the north corner of Main and Governor Streets, but for the rest of his career, his office was at his home on Main Street just north of Gilbert Street — the house later owned for many years by Dr. Peter and Beth Yanity.
A longtime member of the Republican Town Committee, he was “one of the party’s most influential leaders,” his obituary in a 1944 Press said.
Historian Dick Venus touched on that influence in a 1984 Ridgefield Press column about Harvey P. Bissell, the drug store owner who was also comptroller of the state of Connecticut. “Bissell and his close friends, Dr. Russell W. Lowe and the Rev. Richard E. Shortell, made up a triumvirate that pretty much controlled the political action in Ridgefield,” Venus wrote. “The Rev. Hugh Shields, pastor of the First Congregational Church, told a story that pretty much sums up the power that these men had in the political arena.
Shields “told of how during the late 20s it became necessary to find a new representative to the General Assembly in Hartford. According to Mr. Shields, a meeting took place in the back room of Bissell's store, with all three of the leaders present. Mr. Bissell and Dr. Lowe argued at some length as to who the replacement would be. Father Shortell stood quietly by, listening to the other two, extolling the virtues of their candidates. When, after some time they were still at loggerheads, they turned to him and asked who his preference was. Father Shortell brought up a name that had not been mentioned and said, ‘The best qualified man is the Rev. Hugh Shields.’” And Shields soon became Ridgefield’s state representative. [Shields, Bissell and Shortell — the longtime St. Mary pastor — are all profiled in Who Was Who on the Old Ridgefield group.]
Dr. Lowe was active in the Branchville Fresh Air Association, which brought many city kids to spend part of the summer in Ridgefield.  He was a supporter of Chautauqua,  a sort of traveling educational school that included lectures, musicians and entertainers early in the 20th century.
He was a major fund-raiser for Danbury Hospital — a waiting room was named in his honor in the 1940s — and was president of the Danbury Medical Society for more than 25 years.
Dr. Lowe was also among the first Ridgefielders to own a car, which he used primarily to make house calls. His first car, purchased around 1904, was a Stanley Steamer, and it was said that he bought a new car almost every year, apparently wearing them out quickly on Ridgefield’s rough roads.
When he died in 1944 at the age of 76, The New York Times ran his obituary under a headline that called him the “Dean of Ridgefield Physicians.”


“To have known Dr. Lowe was an inspiration — a perfect gentleman, a wonderful diagnostician, and a man who gave everything to the public and his profession,” said a testimonial in The Ridgefield Press. “In his practice, he was extremely conscientious — rich and poor were treated alike.”