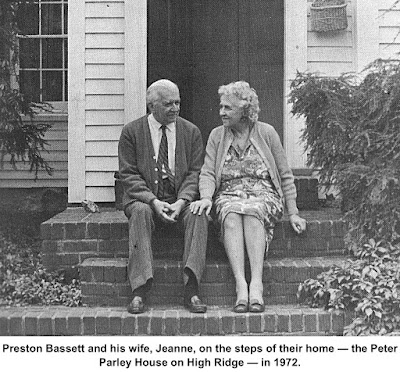 Preston Bassett:
Inventor and Historian
Although he was a nationally recognized inventor and aviation pioneer who became a captain of industry, Preston Bassett was better known locally as a historian, an antiques expert, and a benefactor of the Keeler Tavern.
As an aeronautical engineer and inventor,  Bassett held patents in such varied realms as anti-aircraft searchlights, automatic pilots, and airliner soundproofing,  and counted the Wright brothers, Charles Lindbergh, Eddie Rickenbacker, Wiley Post, and Amelia Earhart among his friends.
Preston Rogers Bassett was born in Buffalo, N.Y., in 1892. His father was an urban planner and his sister, Isabel Bassett Wasson, became one of the first female petroleum geologists in the United States (she was also the first female ranger at Yellowstone National Park, and also one of the first interpretive rangers hired by the National Park Service). 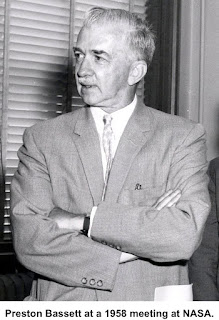 Bassett graduated from Amherst College in 1913 and continued his studies at Brooklyn Polytech.
He joined Sperry Gyroscope in 1914 as a research engineer and remained with the company for 42 years, rising through the ranks to become its president from 1945 until 1956. Sperry, later Sperry Rand, had its headquarters at Lake Success, Long Island, in a huge building that, from 1946 to 1952, also served as temporary headquarters of the United Nations.
Bassett held 35 patents for his aeronautical inventions, including a high-intensity anti-aircraft searchlight— one Bassett searchlight produced 800-million candlepower and could be seen 200 miles away. In 1924 at Mount Wilson Observatory, Bassett assisted Albert A. Michelson in employing an arc light and gyroscope technology to measure the speed of light.
He directed the development of the first blind-flying instruments and the first automatic pilot for aircraft. In 1929, aviation pioneer Jimmy Doolittle tested the Sperry equipment in the first “blind landing”  — now known as an “instrument landing” — of an airplane.
During World War II he focused his efforts on military applications for his inventions, and was a technology adviser to President Franklin D. Roosevelt.
After the war he turned his attention to improving passenger aircraft and engineered the first successful soundproofing system for airplanes. In 1954, President Dwight D. Eisenhower named him to the National Advisory Committee for Aeronautics which, in 1958, became NASA, the National Aeronautics and Space Administration.
While living on Long Island, Bassett had been very active in historical efforts, serving as 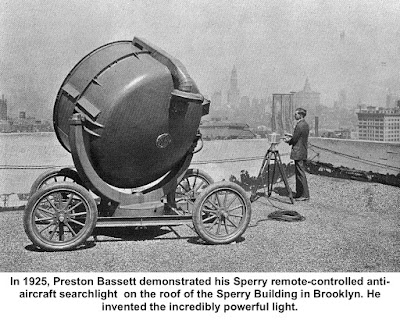 village historian for the town of Rockville Centre, and vice president of the New York State Historical Society in Cooperstown.

He brought that interest in local history with him when he moved  in 1952  to a house on High Ridge, the boyhood home of 19th Century author Samuel Goodrich, whose pen name was Peter Parley.  An inveterate collector, Bassett amassed more than 100 different Goodrich books, many of 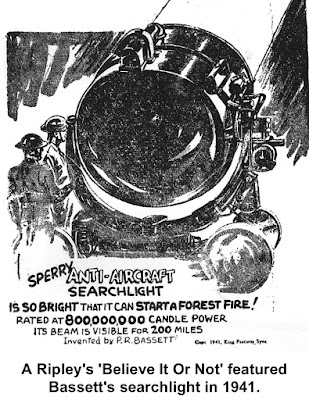 them exceedingly rare, which he eventually gave to the Ridgefield Library.

He was president of the Keeler Tavern Preservation Society from 1968 to 1972, and one of its most important benefactors, donating many artifacts, including pieces of colonial-era furniture. He also provided his expertise to the tavern and to many people in town. Well into his 80s, he would explore dirt cellars and ancient attics to help owners of old houses identify the age of their home’s construction.
Bassett gave away most of his many collections when he was in his 80s, a process he called “uncollecting.” The Smithsonian Institution got his vast collection of more than 800 antique lamps, lanterns and lighting devices, as well as some of his antique bicycles – including the oldest known American bike. Among the other institutions that received his gifts were the Henry Ford Museum, Mead Art Museum, Old Bethpage Village, and the Farmers’ Museum.
Bassett was also a writer, producing many articles on scientific and historical subjects. In 1969, he published a 244-page history of Rockville Centre, Long Island, and in 1981, at the age of 89, “Raindrop Stories,” his book of weather tales for children, was published.
His autobiography, “The Life and Times of Preston R. Bassett,” appeared in 1976, and offered many stories of his life as an inventor and historian. In one tale, he described a flight he took 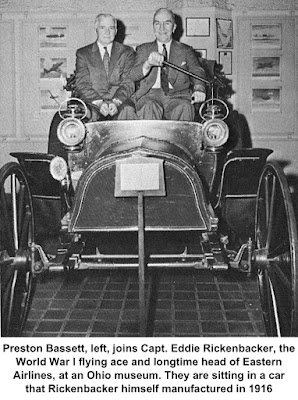 in 1936 across the Atlantic in a German airship, debating with the caption about whether the future of transoceanic flying belonged to the dirigible or the airplane. Less than a year later, that same airship, the Hindenburg, was a burned wreck in New Jersey.

He also did a bit of publishing, hand-printing a volume of poetry written by his wife, Jeanne M. Bassett.
He died at his home in April 1992, just a few weeks after his 100th birthday.
Preston Bassett spent his life inventing many improvements in aircraft. He also knew how to have a bit of aeronautical fun. In 1953, he posed as a British aircraft mechanic in order to get aboard a test flight of the prototype of the first jet-powered passenger airliner, a de Havilland DH 106 Comet that was made in England. He thus became the first American ever to fly in a passenger jet.


In 1971, the last commercial, propeller-driven, trans-Atlantic flight took place; jet airliners had completely replaced prop-planes. “It seems unbelievable to me,” Bassett wrote that year, “that this entire revolution from my test flight to the 100% conversion has all taken place since we moved up here to Ridgefield in 1952.”