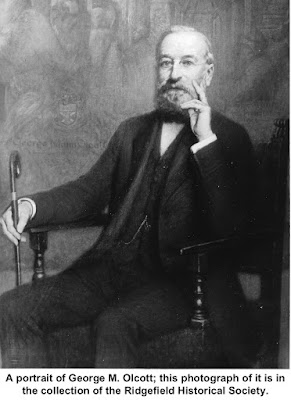 George M. Olcott:
The Man from Casagmo
George Olcott left Ridgefield with a strange legacy: A stone wall, a barn and a name, plus the destruction of a treasured historical building.
Olcott came to Ridgefield in 1892, buying the ancient Stebbins farm at the north end of Main Street. The house, built in 1727, had stood in the midst of the Battle of Ridgefield in April 1777 and served as a hospital for the wounded. “For many generations tourists came to see the bullet-scarred walls and the bloodstained floors of the west room, which were reminders of the conflict which took place around it,” historian Silvio Bedini wrote.
However, Olcott tore down the house, saving only the front door, and replaced it with an Italianate mansion. He called the place Casagmo, a word created from his initials, GMO, and “casa,” the Italian word for house.
And 75 years later,  a wrecking ball laid waste to Casagmo.
George Mann Olcott was born in 1835, in Brooklyn, N.Y. His father, Charles Mann Olcott, was a 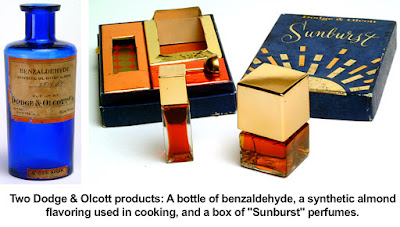 founder of Olcott & McKesson, a drug firm that, after Charles’s death, became McKesson & Robbins, a name that lasted into the 1960s for a company that is today the McKesson Corporation, a pharmaceutical distributor and health care systems conglomerate that had $122 billion in sales in 2012.

Young George attended Columbia College Grammar School. “However,” wrote his daughter, Mary, in a family history, “a youthful delight in caricature terminated his school life, for the headmaster … failed to appreciate a portrait of himself done by the young Mr. Olcott, and a caning was ordered. The boy’s father gave him his choice, either to undergo the caning or leave school. George M. Olcott left school and entered the world of business, where he achieved notable success.”
At age 16,  Olcott became a clerk in a wholesale drug firm. By 21, he was a partner in a drug and chemical importing company, soon called Dodge and Olcott, of which he eventually became president in 1904. His products were not all pharmaceuticals; a big portion of his business was the ingredients in perfumes and food flavorings. He retired when he went blind at the age of 78.
Dodge and Olcott continued in business until 1952, when the Fritzsche Brothers purchased the firm, eventually calling it Fritzche, Dodge & Olcott. In 1980, it was acquired by chemical giant, BASF, which 10 years later, sold it to Givaudan, an international flavor and fragrance company.
Olcott became involved in the local social and business life of the town, serving as president of the library association. He was a founder and second president of the First National Bank and Trust Company of Ridgefield (which through many mergers is now Wells Fargo). He also maintained a residence in New York City, and was on the boards of a half dozen banks and other institutions there.
A popular tale involving Olcott was related by Ridgefield Press publisher Karl Nash in 1975. “On 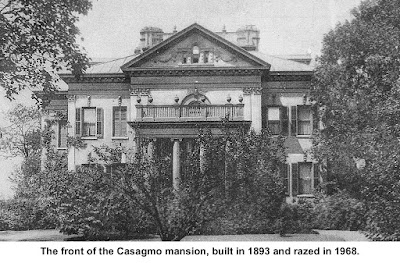 one occasion Mr. Olcott tangled with Samuel S. Denton, the coal and wood merchant who later owned much Ridgefield real estate [and is profiled in Who Was Who]. Denton had acquired the Paddock house, which stood just south of St. Stephen’s Church, and he started moving it up Main Street to a planned site north of Mr. Olcott’s property.

“When the house wouldn’t go between Mr. Olcott’s stone wall and the high bank on the other side of the street (now the Coffey homestead), Denton asked Olcott’s permission to remove a section of his wall temporarily to let the house pass through. Olcott refused.
“The house sat in the middle of the street for a time while Denton scratched his head for a solution. At length he decided to saw the house in half and move it in two sections instead of one. Mr. Olcott watched in amusement.”
Denton never put the two pieces together. Half of the Paddock house still stands, just north of the Casagmo northern boundary on Main Street. The other half, which was moved down around the corner onto Danbury Road, was later torn down to make way for a newer house, just opposite 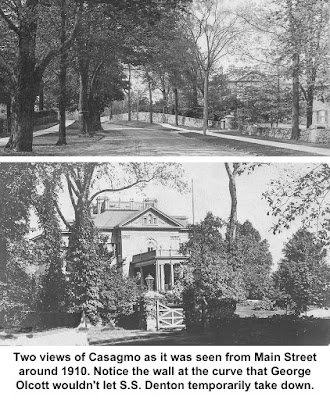 After George Olcott died in 1917, daughter Mary lived at Casagmo until her death in 1962 at the age of 97 — a poet and genealogist, she was rather a grand dame in Ridgefield society.
According to the newsletter published for Casagmo residents, George Olcott was originally buried in Ridgefield, but his remains were eventually moved to a Brooklyn cemetery after Mary Olcott had a disagreement with the owners of the Ridgefield cemetery in which he was interred.
As for the door to the historic Stebbins house, George Olcott had stuck it in the cellar of the 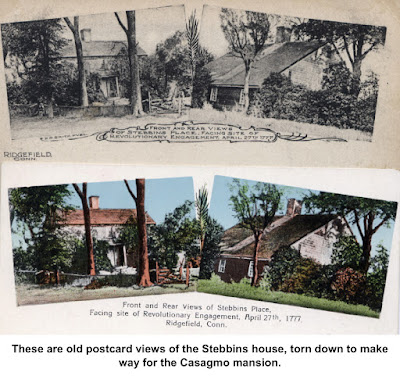 Casagmo mansion, where it sat for years. After the death of Mary Olcott, Ridgefield native

Robert A. Lee got to worrying about the future of the relic. He knew it was in the cellar and he doubted that Miss Olcott’s heirs would care about it. So Lee loaded it onto his car one day and took it to his family’s 18th Century homestead in Farmingville. There the door remained for several years until Lee finally decided to give it to the Ridgefield Library and Historical Association. Around 40 years ago, as it was moving its focus away from the historical side of its original mission, the library donated the door to the Keeler Tavern Museum, where it is today — on display for all to see, especially appropriate as the town is about to mark the 240th anniversary of the Battle of Ridgefield.

Mary Olcott’s heirs sold the property in the mid-1960s to Jerry Tuccio, the homebuilder, who 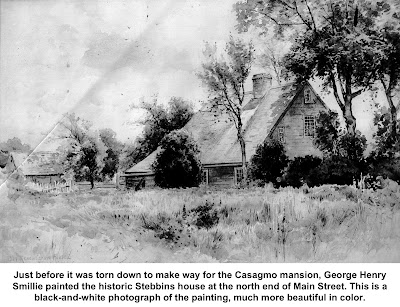 received the rezoning for the town’s first large-scale apartment development. However, Tuccio decided to stick to single-family homebuilding, and sold the rezoned land to David L. Paul, a New York attorney and apartment builder, who razed the mansion in 1968 after years of neglect and vandalism had taken their toll. Paul built 320 apartments. While virtually all evidence of the Casagmo estate was destroyed, Paul retained one major feature: The barn. He and his architect, Lee Harris Pomeroy, restored and remodeled the building into Casagmo’s community center.

Paul later also built Fox Hill on Danbury Road. There, at the recommendation of the Planning and Zoning Commission, he included condominiums. When these turned out to be quite popular, he converted Casagmo’s rentals to condos.


Many Casagmo roads bear names connected with the families that lived there, such as Stebbins Close, Olcott Way, Quincy Close, and Lawson Lane — the last two ancestors of the Olcotts.