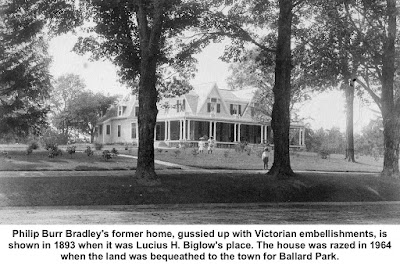 Col. Philip Burr Bradley:
A Post-Revolutionary Pillar
The commanding presence of  Philip Burr Bradley frightened a young “Peter Parley” two centuries ago. And while Samuel G. Goodrich was far from the only one who cowered in the presence of the prominent Ridgefield leader,  Colonel Bradley was nonetheless a pillar of the community when the community, state and nation needed pillars.
Bradley, who had commanded the Fifth Connecticut Regiment during the Revolutionary War, was one of two former military officers who led Ridgefield in the early years of the nation. He was a super-conservative Federalist while his neighbor down the street, General Joshua King, was more democratic in his outlook on people and government (and who is profiled elsewhere on Old Ridgefield).
Both owned a lot of property and both commanded respect, but Bradley was often feared as well as respected while King was more warm and friendly to all.
Philip Burr Bradley was born in 1738 in nearby Fairfield to an old and wealthy Connecticut family. Vice President Aaron Burr was a first cousin, and an another cousin was married to Tapping Reeve, founder in 1784 of the Litchfield Law School, one of the first law schools in the nation.
He graduated from Yale in 1758 and a year later, moved to Ridgefield where he soon gained prominence, acquiring properties throughout town, including farms.
King George III made him a justice of the peace in 1770, a job rather more important then than now and equivalent to being a county judge. While he considered himself a loyal subject of the king well into the 1770s, clashes both political and military between England and the colonies led to his becoming a leader of the revolutionaries.
John Jay signed his commission as a colonel in the Continental Army. He eventually took command of the Fifth Connecticut Regiment — whose members included many Ridgefielders. He saw action at the Battles of Germantown, Monmouth, and Stony Point and was among the troops who wintered at Valley Forge. He also fought under General Benedict Arnold at the Battle of Ridgefield — virtually in front of his homestead on Main Street.
During the war he frequently corresponded with General George Washington about official business. “Washington and Bradley were reported to have been friends,” Smithsonian historian Silvio Bedini reported. A family tradition maintained that Washington visited Bradley at his Ridgefield home, located in what is now Ballard Park. “Bradley descendants for many generations preserved a chair, a china bowl and a pitcher, which were said to have been used by Washington during his visit,” Bedini said.
Whether or not they were friends has not been proven, but “it’s is a matter of record that Bradley had the highest esteem for his commander-in-chief, and that Washington valued Bradley’s services in the war,” Bedini adds.
An indication of the respect Washington had for Bradley occurred during the war when Bradley fell ill in the Hudson Palisades of eastern Bergen County, New Jersey. His wife, Ruth Smith Bradley, traveled to his bedside and spent six weeks nursing him back to health. When it was time for her to return to Ridgefield, General Washington assigned three men to escort her on the journey home.
After the war President Washington named Bradley Connecticut’s first marshal,  which at that time made him the top federal law enforcement official in the state. President John Adams renewed the appointment during his administration. When he resigned the post in 1801, Bradley wrote President Thomas Jefferson that “the state of my health is such at present as prevents me from paying the necessary attention to the duties of the office.”
On the home front, Bradley held positions of importance. He was elected a selectman three times in 1767 to 1769, and served as a Ridgefield representative to the colonial Legislature from 1769 to 1776, when he entered the military. He resumed service as a state representative for all but one 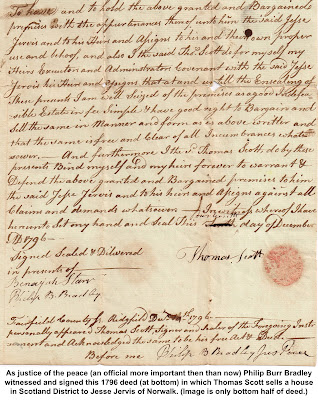 year from 1780 until 1791, a critical period when the new “State of Connecticut” was being organized, and when its young government was dealing with heavy war debts.

In 1788, he was one of the delegates to sign Connecticut’s ratification of the U.S. Constitution.
Another  sign of his local importance was shown in 1786 after it was discovered that Lt. Ebenezer Olmstead, who had also served under him in the Connecticut Fifth, had misappropriated a large amount of state tax money he had collected on behalf of the town. Olmstead was arrested and Bradley headed a committee to auction off the Olmstead’s Main Street homestead. However, when earned only 120 pounds, far less than what was owed to the state,  Col. Bradley was dispatched to Hartford to see if Ridgefield’s state tax debt could be forgiven. The state was insistent, however; the war had been costly and it badly needed money. The town wound up going into debt to pay off the missing taxes; Ridgefield was so poor and desperate that, in 1792, it voted to sell its set of “books containing the laws of ye United States.”
At a boy Samuel G. Goodrich — “Peter Parley” in many of the more than 100 books he produced in the 19th Century —  knew Bradley. The Colonel would be seen in the Congregational Church, where Goodrich’s father was minister, and he would sometimes visit the Goodrich home on High Ridge.
“He was the leading citizen of the place, in station, wealth, education, and power of intellect,” Goodrich recalled in 1856.  “He was a tall, gaunt, sallow man, a little bent at the period of my recollection….
“I perfectly recollect his appearance at church, and the impression he made upon me. He was bald, and wore a black silk cap, drawn down close over his eyes. These were like jet, not twinkling, but steady and intense, appearing very awful from the dark caverns in which they were set. I hardly dared to look at him, and if perchance his slow but searching gaze fell upon me, I started as if something had wounded me.”
Bradley’s gambrel-roofed house, probably somewhat similar in appearance to the Hauley House at Main and Branchville Road, stood in what is now Ballard Park.
“This was of ample dimensions, and had a grave, antique air, the effect of which was enhanced by a row of wide-arching elms, lining the street. It stood on a slight elevation, and somewhat withdrawn from the road; the fence in front was high and close; the doors and windows were always shut, even in summer.
“I know not why, but this place had a sort of awfulness about it: It seemed to have a spirit and a voice, which whispered to the passer-by, ‘Go thy way: This is the abode of one above and beyond thee!’ ”
While Bradley had a “cold” and “distant” air about him, Goodrich said, “He was, I believe, an honorable man. He was a member of the church; he was steady in his worship, and never missed the sacrament. He was a man of education, and held high offices.”
Bradley was “the most distinguished citizen of the place, and naturally enough imagined that such a position carried with it, not the shadow, but the substance of power. He seldom took an open part in the affairs of the town, but when he did, he felt that his word should be law. He deemed even a nod of his head to be imperative; people were bound to consult his very looks, and scenting his trail, should follow in his footsteps.
“Like most proud men of despotic temper, he sometimes condescended to bring about his ends by puppets and wire pullers. Affecting to disdain all meddling, he really contrived openly or covertly to govern the church and the town.
“When parties in politics arose, he was of course a federalist; though ostentatiously standing aloof from, the tarnish of caucuses, he still managed to fill most of the offices by his seen or unseen dictation.”
He was as conservative as they came. “Such a man,” Goodrich said, “could little appreciate the real spirit of democracy, now rising like a spring-tide over Connecticut. Believing in the ‘Good old way,’ he sincerely felt that innovation was synonymous with ruin. Thinking all virtue and all wisdom to be centered in the few, he believed all folly and mischief to be in the many. The passage of power from the former to the latter, he regarded with unaffected horror. The sanctity of the church, the stability of the law, the sacredness of home, life, and property, all seemed to him put at hazard if committed to the rabble, or what to him was equivalent, that dreaded thing—democracy.”
However, Goodrich observed, gradually “the leaven of democracy affected more and more the general mass. Federalism held itself haughtily aloof from the lower classes, while democracy tendered to them the gratifying signals of fraternity. Federalism really and sincerely distrusted the capacity of the people to govern themselves, except through the guidance and authority of the superior classes; democracy believed, or pretended to believe, in the people, and its works were according to its real or seeming faith.”
Though Goodrich’s descriptions seemed to convey a dislike of Bradley, he in fact appreciated 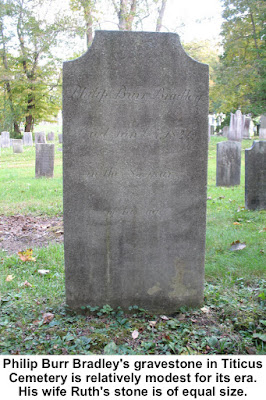 Bradley’s importance in the early years of the nation when strong leadership was needed. “However old-fashioned it may seem,” he said in the 1850s, “I still look back upon those stiff federalists, sitting in their pews like so many judges in Israel — rigid in their principles, hard, but honest, in their opinions — with a certain degree of respect.

“Perhaps, too, they were not altogether wrong, though the battle has gone against them. If, at the outset of our government, which was launched at the very period when the French Revolution was agitating the world with its turbulent waves, the suffrage had been universal, probably we should have gone to destruction. Federalism, no doubt, locked the wheels of the car of state, and thus stayed and regulated its progress, till the steep was passed, and we were upon the safe and level plain. Theoretically wrong, according to present ideas, federalism was useful and necessary in its day. It is to be regretted that its spirit of patriotism is not imitated by all modern partisans.”
Bradley died in 1821, three years after Connecticut adopted its new Constitution that favored democratic principles over federalism; it extended the right to vote to virtually all white males, not just landowners, disestablished the Congregational Church as the official state church; strengthened the power of the people in running government, and established 21 protected individual rights for all.
No longer were the “standing order” — the wealthy, male elites like Colonel Bradley — in control of the government.