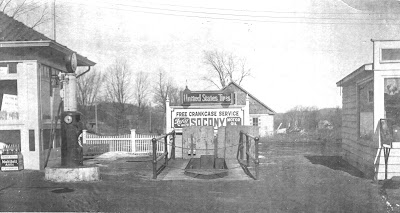 Service Station A La 1920s
What was perhaps Ridgefield’s first full-service gasoline station was located at 31 Danbury Road where Ridgefield Mobil is today.
These photos from the 1920s show the Socony station when it was owned by John M. Moser, whose house was at 55 Danbury Road, still standing across from where Dunkin Donuts is today. That’s probably Moser in the doorway of the garage office, with a cigar in his mouth.
The picture of the office has a couple of interesting features: A sign in the window at the left says “Cigarettes and Cigars” are for sale and another sign just to the left of the building reports,  “Rest Rooms Inside.” It’s hard to imagine how restrooms could fit into that little (albeit elegant) shack. 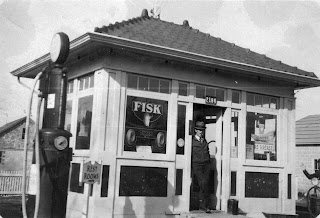 One entertaining feature of the office picture: If you look at the extreme right, you will see an arm and a hand, and just a tiny bit of the face of a man who was obviously waving at the camera, but didn’t quite fit into the picture.
The second photo focuses on the service area, with the office at the very left edge of the
image. Back in the 1920s, automobiles were not serviced in indoor bays but outdoors, over pits. The chains, pipe-fencing and boards shown here were designed to keep people from accidentally falling into the pit.

In that same picture, you’ll notice at the left a wooden case of what look like quart bottles of soda or beer. That was Mobiloil Arctic motor oil, a product then packaged in bottles instead of cans.
A hardly visible sign on the pump indicates that fuel was 20 cents a gallon back then.
Socony (Standard Oil Company of New York) eventually became today’s Mobil, so Ridgefield Mobil can make the rare claim of selling the same company’s gasoline in the same location for nearly a century.
Other product brands seen on signs here like Fisk Tires, United States Tires, and Weed Chains have long gone.
In 1931, Moser sold the operation  to Warner Keeler, Charles Elliott and Francis Brown, whose initials formed the new business’s name, KEB. They built a larger building on the site.
Keeler had worked for Moser. He left KEB in 1945. Brown died in 1955, leaving Charlie Elliott the sole owner of KEB until 1971 when he sold the station (but continued to operate his refuse-collection business). From 1971 on, it’s been Ridgefield Mobil.