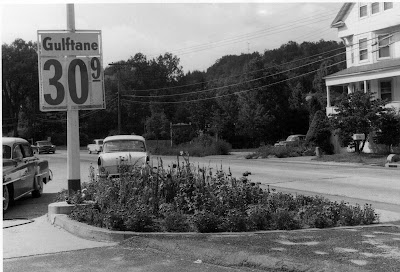 Cheap Gas?
This odd picture was in a group of shots of Branchville, taken in 1962 on the occasion of the Ridgefield Saving Bank’s opening a branch office on Route 7, some of which   appeared in recent posts.
This view show a sign at Riverside Motors Gulf Station at 32 Ethan Allen Highway, operated by the well-known Tarquinio “Turk” Pambianchi (1920-95), now the home of Precision Brakeworks.
While Riverside sold Gulf gasoline, Precision Brakeworks — using essentially the same building — does not sell gas.
The sign notes that Gulftane was 30.9 cents a gallon. While that seems ridiculously low compared with  today’s prices, 30.9 cents in 1962 was the equivalent of $2.55 in today’s money.
What’s more, Gulftane was what was called “subregular” gas, a grade below regular that is no longer generally available. (Regular Gulf gas was called “Good Gulf,” above which there was Gulf No-Nox premium, and Gulf Super Unleaded or Gulfcrest.)
Incidentally, the original Gulf Oil Company disappeared in 1985 when it merged with Standard Oil of California to become Chevron. However, the brand name, Gulf, is still licensed to a variety of automobile products including gasolines, made by other companies.
At the right edge of the picture is a house at 33 Ethan Allen Highway that is today offices, apartments and a little variety store called NJ Condiment. It was owned by Peter Mugavero, who eventually had his barber shop on the ground floor. Peter is now retired and living in Florida.
Peter’s parents, Jerry and Mary Mugavero, lived in a house just beyond the unreadable sign in the distance.  According to grandson Peter Mugavero, a member of the “Old Ridgefield” group, their house is still standing and still painted the same gray color; it’s used for offices of American Irrigation Systems.
The trees in the distance to the left have been largely replaced by a commercial building housing a Dunkin Donuts, Soccer & Rugby Imports, and a Fred Astaire Dance Studio.