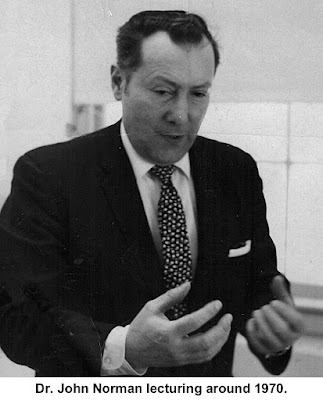 Dr. John Norman:
Professor, Poet And Secret Agent
Dr. John Norman was as comfortable writing poetry as he was working for the OSS. In his long life, he associated with secret agents and a Nobel Prize-winning author, loved and probed propaganda, taught at many universities, wrote books, and took part in the workings of Ridgefield government.
A native of Syracuse, N.Y., John Norman was born in 1912. He did his undergraduate work at Syracuse University, earned his doctorate at Clark University in Worcester, Mass., and began teaching in colleges.
Early in his career, Norman became a noted expert on fascism and several of his articles drew the attention of the Office of Strategic Services (OSS), the predecessor of the Central Intelligence Agency, which recruited him during World War II.
There he served as a field representative, debriefing refugees from Nazi Germany and others who had fled fascism in Europe before and during the war. Among the people he interviewed were Thomas Mann, the Nobel Prize-winning novelist; Don Luigi Sturzo, the founder of Italy’s Christian Democratic Party; and Lion Feuchtwanger, the German Jewish writer — whose escape from the Nazis was engineered by another Ridgefielder, Varian Fry (q.v.). What information refugees reported to him was turned over to the State Department, the Joint Chiefs of Staff, and intelligence officers.
“They were walking encyclopedias on names, dates, places, and politics of their respective countries,”  Norman said about the refugees years afterward.
He later worked as section chief of the Italian Desk of the State Department’s Office of 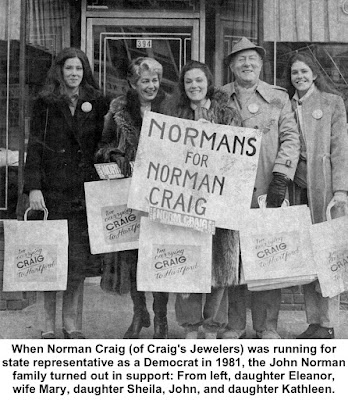 Intelligence Research, and was a historian on Sino-Soviet affairs for the State Department. He also served with the American delegation to the United Nations Conference in San Francisco in 1945 that led to the founding of the UN.

He subsequently became one of the first professors to create and teach a college course in U.S. intelligence and espionage, and a number of his students went on to work for the CIA.
Over the years,  Norman taught history, political science and government at Syracuse, Carnegie Institute of Technology, Chatham College, Fairfield University, and finally at Pace University in Pleasantville, retiring in 1987. He was included in the Outstanding Educators of America in the 1970s.
A public lecturer and author of many articles including contributions to the Encyclopedia Britannica, American Encyclopedia and to the Funk and Wagnalls Encyclopedia Yearbooks,  Norman wrote two books, “Edward Gibbon Wakefield, A Political Reappraisal” (1963) and “Labor and Politics in Libya and Arab Africa” (1965).
In 1954, his essays on the rise of fascism in Italy before World War II led to a knighthood from the government of Italy with the Order of Al Merito Della Repubblica.
He was a voracious reader of publications from around the world, even propaganda. “Propaganda lets you know what that country wants you to believe, and that’s important,” he told Ridgefield Republicans in 1980.
An expert at interviewing, Norman served as a fact-finder for the Connecticut Board of Mediation and Arbitration for 12 years; Gov. William A. O’Neill commended him in 1984 for his “record of integrity and professionalism.”
He and his wife Mary Lynott met at Chatham College in Pittsburgh, Pa., when he was the chairman of the political science department and she was a student. They were married for more than 50 years. The couple moved to Ridgefield in 1968 where he became active in the Democratic Party, 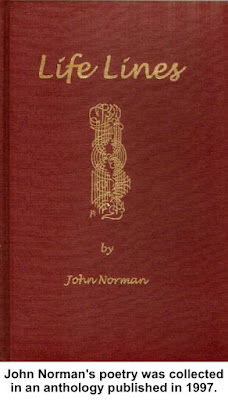 serving on the Democratic Town Committee many years and working on the campaigns of a number of candidates.

Norman frequently spoke on national and international government and politics before local clubs and organizations, often wrote letters to The Press on local and national political and education issues, and spoke out at town meetings.
He also wrote many poems that appeared in Arcadia Poetry Anthology, Our World’s Most Treasured Poems, and the National Library of Poetry. “Life Lines,” a collection of his work, came out in 1997 on the occasion of his 85th birthday.
After his retirement from Pace in 1987, the Normans traveled to many places in the world that had been subjects of his classes, including the sites of Homer’s Odyssey in Greece. (In the 1960s, he had written the script for a movie entitled “Brother Anne,” which was filmed in Greece.) They also traveled to Mexico to pursue a mutual interest in the Mayan and Aztec civilizations.
He died in 2002 at the age of 89 and is buried in St. Mary’s Cemetery.
John Norman shared many of his often light-hearted poems with the readers of The Ridgefield Press. Here’s one he wrote for a pre-Christmas issue in 1985, called “Gifts for Santa”:
Dear Santa Claus, you always give
And never get. How can we live
In wait each year when we all know
Your gifts are more than we should owe?
It's time we showed appreciation
For all your Christmas recreation.
It’s now our turn to try to guess
Your needs and wants, Oh, more or less.

Let’s see if we can get a belt
That fits; or buy a cap that’s felt;
A tie that matches; underwear
To cover what’s so big and bare;
A book about your losing weight;
A watch to keep from being late;
A larger sack to carry more —
Oh no, your back’s already sore!
In short, let’s see your features glow
As we all laugh, ‘Hoho, Hoho!’
From this, do we indeed believe:
’Tis better to give than to receive?