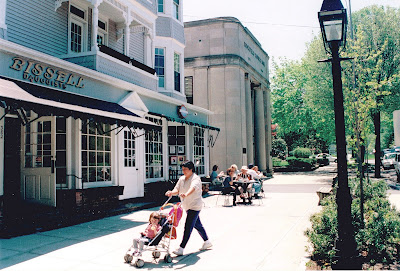 The Old Bissell Building, 1997
Here’s a scene that looks remarkably the same today as when the picture was taken in the summer of 1997, except for two big things, one obvious and one not so obvious.
Not so obvious is the fact that the Bissell Building in the background is not the same “Bissell Building” that’s there today. This one burned to the ground in the spring of 2005, but was replaced by a virtually identical structure. They look alike but aren’t the same.
Today’s storefronts belong to Interiors and Designs by Ursula, where Bissell Pharmacy was, and the Village Tavern, where Gail’s Station House was. (After the fire Bissell’s moved a half block east to the old Toy Caboose building on Governor Street while Gail’s never reopened.)
What’s really visually different is the sidewalk seating for the restaurant. Back then, Gail’s Station House provided two, maybe three little tables on the sidewalk out front. Gail’s was the only restaurant in town with sidewalk seating 20 years ago!
Today, there’s the equivalent of a whole dining room sitting outside the Village Tavern, complete with huge planters. It looks as if close to 40 people could dine on the 2018 sidewalk.
What’s more, every single restaurant on Main Street today has — in season — outdoor seating on the sidewalk.
Also different are the trees at the extreme right. Then they were little more than saplings, part of a recent renewal of Main Street that included those fancy lantern-like lights. Some of those young trees died in the heat of the 2005 fire, but one survived and is as tall as the new “Bissell Building” today.