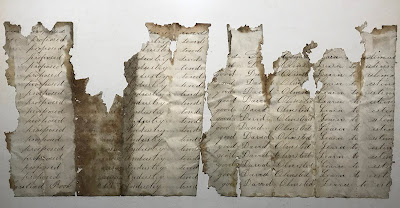 Among the 14,000 or 15,000 tons of trash Ridgefielders send to the transfer station each year may be a few pounds of valuables.
Mostly they are just pieces of paper, but they are also the stuff of the adage, “one man's junk is another man’s treasure.”
They wouldn’t fetch big prices, these treasures; they are valued for something more than money.
They are the ephemera of a community, found among the left-behinds of people who have died, the no-longer-wanteds of people who are moving away, or the spring cleanings of people “tired of all that junk in the attic.”
Ephemera is a funny word whose etymology explains why these pieces of history are so often doomed. It’s from the Greek, meaning “short-lived.”
“Broadly speaking,” says one authority on ephemera, “the word ... is used to denote the transient, everyday items of paper (mostly printed) that are manufactured specifically to use and throw away.”
The Ridgefield Press, for instance, would be ephemera. You read it, you toss it. However, it is a history of the town so steps have been taken to preserve its pages. However, so much else ephemeral but interesting about a community like Ridgefield is truly short-lived.
One of my favorite examples of unusual ephemera is a stained, mouse-chewed scrap of paper found in the attic of our 18th Century house soon after we moved in 45 years ago. It is a page of a pupil’s writing notebook from about 1850.
On the page was a handwriting lesson of a boy named David Olmstead, who had lived in the house. Over and over, sentences were repeated to practice script so neat it would put to shame 90% of today’s adults.
At the bottom of one page was what remained of his signature, “David Olmsted Book, age 12.”
A remarkable feature of this practice session was that at one point David was writing his name, over and over, following an example that his teacher had apparently written down. Midway through the exercise, David changes the spelling from Olmsted to Olmstead — from the old way the name was spelled to the more modern version — and then he returns to Olmsted. Had the teacher mistakenly written his name the old way and he had obediently copied the teacher’s version, slipping once because his own family used the new version?
Even without this oddity of aberration, the scrap was interesting in itself. Here was a piece of a child’s life in the middle 1800s. It became all the more interesting when research revealed that David  died only five years later, at the age of 17. He was probably the victim of one of those ailments that today are cured with a few pills but a century and a half ago, killed you.
We framed the scraps of David Olmstead’s writing paper. It’s hanging on a wall of the house he was growing up in when the likes of James K. Polk, Zachary Taylor and Millard Fillmore were President.
No doubt, David didn’t think much of this piece of paper when he was alive. It was just a homework assignment. Perhaps after he died his parents stashed it in the attic as a little thing to remember him by.
To us, however, it is a touch with the past, a visible sign that there was life — even death — occurring in our home long before even our own great grandparents were around.
I would love to have a photograph of what people who lived in our house looked like long ago. No doubt, pictures once existed. And no doubt, they were thrown away by people who thought they were worthless.
I would love to see a century-old picture of the road on which we live. Undoubtedly, many were taken. They, too, are probably gone.
I would love to read letters, written about the neighborhood by people who lived next door or down the street 100 or 200 years ago. But who saves letters that long?
These would all be glimpses of history — close-to-home history. They’d help us understand our predecessors in a more personal, more close-to-the-heart way.
Fortunately, a group of Ridgefielders has recognized that much that is valuable historically was being tossed when it should be saved —  for historians, for genealogists, for anyone who values the past.
The Ridgefield Historical Society is not only collecting but cataloguing ephemera and other historical materials dealing with Ridgefield.
So don’t toss old or “oldish” photos of town, letters your Ridgefield grandmother wrote, diaries, or even pamphlets or local advertising brochures from “the old days.” Offer them to the society.  Your junk may well be truly junk; but some could be treasures for the future. Let the society archivists decide.
And speaking of letters, many Ridgefielders will soon receive one from the Ridgefield Historical Society, seeking a donation to help support the society’s work. Please read its message and, if you can, chip in toward this wonderful organization’s efforts to not only preserve the past, but teach the present about our fine old town and its rich history.