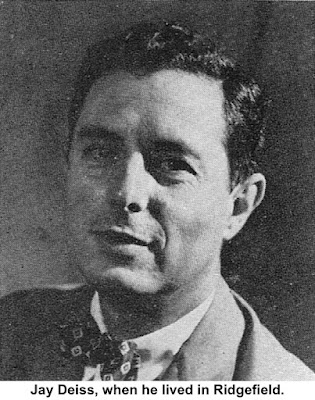 Joseph Jay Deiss:
Knight of Italian Solidarity
When Jay Deiss lived in Ridgefield in the 1940s, he was itching to write his first book.  After years of working in Washington and New York, at first for the government, and later for Big Pharma, he sat down and turned out a novel that sold well enough to let him buy an “oysterman’s cottage” on Cape Cod, to which he eventually moved.
Its success also helped enable him to quit writing PR and instead delve into subjects he cared about, especially Italian history.
Joseph Jay Deiss was born in 1912 on a ranch in Idaho, but grew up in Texas. He earned bachelor’s and master’s degrees at the University of Texas, but it was the Depression and he spent his early life, as he described it, “as a pots-and-pans salesman, truck farmer, seaman and gravel-shoveler on a road gang.”
He started out his writing career as a reporter in Texas, wound up in Washington working for a New Deal farm agency, and then became a public relations writer for pharmaceutical companies, especially Pfizer, in New York City. One afternoon in the 1940s, according to his own third person account, “he walked out, headed for the country, and settled down to write the novel which came to be ‘A Washington Story.’”
The “country” was New Street in Ridgefield, where he lived with his wife and two children.
Set during the period of the anti-communist “witch hunts” of the late 1940s, “A Washington Story” centers around Faith Vance, who had worked for the government for eight  years in a job she liked, but she was unhappily married to Thatcher Vance. Suddenly and without any cause she is 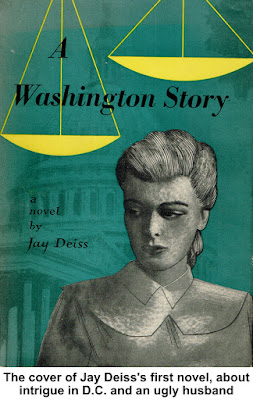 subpoenaed by the House Investigating Committee, which has been told she may be a subversive and which, because she cannot find her birth certificate, questions her citizenship. Her husband walks out, taking their young child, she is hauled off to Ellis Island for deportation, and she is left with no friends or support — except for a young attorney named Dave Chandler, who tries to come to her rescue. “There’s a high pulse beat here, and more than a little fictional glamour, but there’s also a definite basis in fact,” said Kirkus Reviews.

The novel’s dust jacket described it as “a story so strange that its counterpart can be found only in the newspaper headlines of today.”
Years later, The New York Times reported that “A Washington Story” was on the Moscow City Library’s list of 19 books described as “the most important literary products of the U.S.A. published after the Second World War.” The list included novels by Ray Bradbury, William Faulkner, Ernest Hemingway, Langston Hughes, Sinclair Lewis, William Saroyan, and John Steinbeck.
Deiss continued to write fiction. In 1957, “The Blue Chips” was published by Simon and Schuster. It delved into the ethical drug business and, said Kirkus, was “the first to treat the world behind the wonder drug prescription ... it traces the discovery, exploitation and down-grading of multicilin, a broad-range antibiotic.”
The same year, Deiss moved to Positano, Italy, became vice director of the American Academy in Rome, and began studying and visiting the nearby ancient cities of Herculaneum and Pompeii. This led to an interest in many aspects of Italian history.
In 1963, he produced “The Great Infidel,” a biographical novel about Frederic the Second 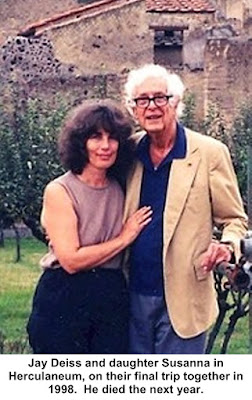 (1194-1250), a Holy Roman emperor and king of Sicily. While it is a work of fiction, largely because Deiss imagined the dialogue for the characters, Orville Prescott wrote in The New York Times that the book’s “fidelity to history is sufficiently great so that it can be read as an able account of Frederic and the spectacular drama of his life.”

He turned to non-fiction, with books like “Herculaneum: Italy’s Buried Treasure” (1966), “Captains of Fortune, Profiles of Six Italian Condottieri” (medieval soldiers of fortune) (1966), “The Roman Years of Margaret Fuller” (1969), and “The Town of Hercules, A Buried Treasure Trove” (1995).
His writings and lectures on Italian history so impressed the Italian government that in 1971 it knighted him in the Ordine della Stella Solidarita Italiana (Order of the Star of Italian Solidarity), which honors expatriates or foreigners who made an outstanding contribution to the reconstruction of Italy after World War II.
Deiss spent his later years living in Wellfleet on Cape Cod and in Florida where he taught in the Classics Department at the University of Florida and where he died in 1999 at the age of 84.
Today, his love of Italy is reflected in the Joseph Jay Deiss Memorial Scholarship  for Summer Study in Italy, awarded annually by the University of Florida.