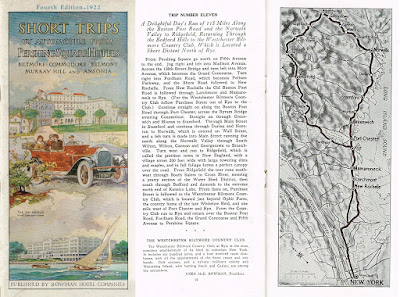 ‘A Delightful Day’s Run’
A century ago, Ridgefield was a popular tourist destination, with a half dozen “hotels” in the village where visitors could stay. It was also a fine place to visit on Sunday drive.
An example of Ridgefield’s fame in the tourism world  is this 32-page booklet, called “Short Trips by Automobile from the Pershing Square Hotels.” The guide was published in 1922 by the hotel group in Manhattan, owned by Bowman Hotel Companies, which included such well-known establishments as the Biltmore and Commodore.
The guide’s aim was to help hotel visitors explore the countryside outside of the city via a choice of 18 automobile tours — which it called “runs” — across Connecticut, New York, Long Island, and New Jersey.
Remember that this is an era when automobiles were far from the comfortable, reliable vehicles they are today. And for much of the routes, they were traversing dirt roads.
Tour #11 took motorists northeasterly from Manhattan out to the Boston Post Road along the Long Island Sound shore towns from New Rochelle, Mamaroneck, Port Chester, Greenwich, Stamford to Norwalk, where the route then headed north through the Norwalk River Valley over what would now mostly be Route 7 up to Branchville.
From there the drive headed up Branchville Road (now Route 102) to Main Street. At this point, the normally dry description of the tour turns almost ecstatic as it announces that Ridgefield “is called the prettiest town in New England, with a village street 200 feet wide with large towering elms and maples, and in full foliage forms a perfect canopy over the road.”
The directions then sent motorists out West Lane and South Salem Road (Route 35 today) into New York state and back toward Manhattan.
Branchville Road, Main Street and West Lane/South Salem Road were all dirt surfaced back then.
The entire tour, which the guide calls “a delightful day’s run,” covered 118 miles.
If you didn’t happen to have your own automobile, the Commodore and Biltmore offered a rental service at their combined garage. “Experienced chauffeurs familiar with New York and vicinity are available at all times,” the booklet said. In addition, “a wrecking car will answer S.O.S. calls anywhere in the Metropolitan district, by night or day.”
The accompanying picture shows the cover of the guide, and pages 18 and 19 with tour featuring Ridgefield.