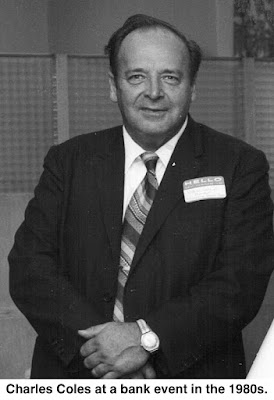 Charles Coles, He Loved The Bank
Charlie Coles had many interests, but his two favorites were banking and local history. A man who rose from teller to  president of the Ridgefield Savings Bank (now the Fairfield County Bank), he had a love of and faith in banking that was demonstrated in many ways, but few quite as intensely as when he chewed out a Ridgefield Press editor for a half hour after the newspaper ran a humorous quotation over the front page flag, saying: “A penny saved is a penny getting smaller.”
He was fascinated by Ridgefield history and memorabilia, collecting and studying items ranging from candlesticks made here in the 1800s to hundreds of antique Ridgefield postcards. He was also a collector of and expert on antique clocks, many of which he had exhibited at the bank's several offices.
Though many people thought of him as a native, Charles H. Coles Jr. was born in Oakville, Toronto, Ontario, in 1922. His parents, Charles Sr. and Elizabeth Evans Coles, were natives of England who immigrated to Canada and in 1925, moved to the United States. By 1928, they were in Ridgefield, where Charles Sr. became a gardener on the Maynard estate on High Ridge. Charles Jr. attended Ridgefield schools and graduated from Ridgefield High School in 1941.
During his high school years, he was active in athletics, especially baseball, and earned the nickname of “Slugger Coles” because of his hitting abilities. He was a member of an RHS team that nearly won the state championship for little Ridgefield in 1940.
Coles was a student at Danbury State Teachers College in 1943 when he joined the U.S. Army and was assigned to the 193rd tank battalion. Sent to New Hebrides in the Pacific, he took part in the invasion of Okinawa in April 1945. He was a tank machine gunner and driver.
On April 19, his unit lost 22 of its 30 tanks in the assault on Kakazu Ridge, the greatest tank loss of the campaign. Only an hour after Private Coles was transferred from a tank that morning, its entire five-member crew was killed.
After the war Sgt. Coles served in the Army Reserves and was on active reserve status during the Korean War.
Back home in 1946, he joined the Ridgefield Savings Bank as a teller and bookkeeper. He became assistant treasurer in 1956, an incorporator in 1958, a director in 1970, and president in 1971. He served as president, chairman of the board, and chief operating officer at various times through the 1970s until his retirement in 1987. He remained a director until 1993.
Ridgefield Savings Bank became “the fastest-growing savings bank in the state” in the 1980s, Coles reported at the 1984 annual meeting. Under his leadership, the bank acquired land at the corner of Danbury and Farmingville Roads to build its new headquarters, now the main office of Fairfield County Bank.
Over the years he completed the Graduate School of Banking at Rutgers University, and graduating from the American Institute of Banking (of which he was later a board member) and from various schools sponsored by the national Association of Mutual Savings Banks. He served as 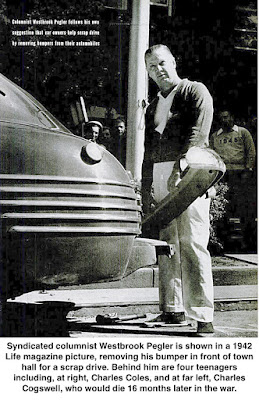 president of the Fairfield County Bankers Association, was on the Conference of State Bank Supervisors in 1985, and had been a member of the Legislative Committee of the Savings Bank Association of Connecticut.

“His whole life was the bank,” said Paul S. McNamara, longtime chairman of the Fairfield County Bank board of directors. “He loved the bank — he loved going to work.
“Charlie really believed very strongly in the value of the customer,”  Mr. McNamara added. “His focus was always on the customer.”
Coles had a way with not only money, but also words.  For a while in the 1950s, he was the part-time sports editor for The Ridgefield Press.
In 1971, on the occasion of the bank’s 100th anniversary,  Coles teamed up with Karl Nash, editor and publisher of The Press, on a history of the Ridgefield Savings Bank.  Coles did the bulk of the research for the publication, which appeared as a special supplement to The Press and chronicled the history of the bank, its leaders, and the community they served. The 36-page section was based on many hours of interviews with longtime residents and from research into old documents, and included dozens of old photos of the town, many from  Coles’s postcard collection.
Twenty years later,  Coles was one of the lead writers on another history section in The Press, describing the town’s participation in World War II. He spent months researching the 49 members of the Ridgefield High School Class of 1941 and their contributions to the war effort. His long article was entitled “Class of ’41: First to Go.” (Two classmates, George Vetter and Charles Cogswell, never returned.)
Coles had a great interest in antiques and especially antique clocks, a subject on which he became known as a local expert. He was especially interested in Ridgefield antiques and ephemera and had dealers all over the country helping him locate Ridgefield-related items. In 1983, for the town's 275th anniversary celebration, he put together a large display of old postcards, which he exhibited at the bank’s Main Street office.
He loved athletics. In the late 1940s and 1950s, Coles played softball in leagues in Westchester and Ridgefield. In his first game in the newly formed Townies Softball League in Ridgefield in 1953, he hit a home run and pitched Hyde’s Liquors to a 10-6 win over Martin’s Jewelry Store.
He also became active in youth sports. He was one of the organizers of Ridgefield Little League, and later served as its president. He managed Babe Ruth League baseball teams, had been a coach in the Red Raider football league, and managed boys teams in the Townies Basketball League.
In 1999, the Ridgefield Old Timers honored him with its Civic Award, citing his “dedication and hard work  in the various youth programs... Charlie spent many hours helping young athletes improve their skills.”
Coles was also fond of golf and invariably had a set of clubs in his car trunk, along with some of his latest antiques acquisitions.
He was active in Boy Scouts, serving as committee chairman of Troop 47. He had been a member of the Rotary Club for many years, an incorporator of the Ridgefield Boys’ Club, a treasurer of the Community Center, and treasurer for the local Red Cross. In 1967, he was given the Ridgefield Jaycees Distinguished Service Award.
When he retired after 42 years with the bank, he received testimonials for his service to  community from many leaders, including President Ronald Reagan.
Coles died in 2003 at the age of 80.
“Something about Charlie that a lot of people are not aware of,”  Paul McNamara said after Coles had died. “He was very helpful to people in town in a very quiet way. If someone came to Charlie with a financial problem, he found a way to solve it. And he did that over and over again.”