The Selling Of Eight Lakes

“Nowhere else in these United States is there such an abundance of fabulous, natural scenery,” boasts a remarkable brochure, published around 1955 to promote the Eight Lakes Estates and clearly aimed at dwellers of New York City. “That long dreamed of estate you have only wished you could afford is here NOW at a price you can afford.”
The fabulous abundance consisted of 1,750 acres — “over three times the size of Central Park” — spread across two states and including “eight magnificent, crystal clear, fresh water lakes, miles of lakefront studded with stately trees, hundreds of picturesque lakeview sites, divine locations high in the hill-tops [and] thickly wooded hideouts near streams.”
It was a masterpiece of real estate hype, aimed at “Mr. Family Man” who wants to make his “dreams come true.”
At times during the mid- to late 1950's, as many as 20 salesmen for Eight Lakes were 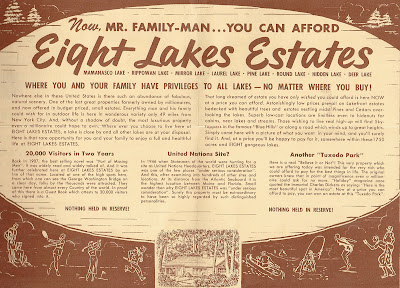 working in Ridgefield over weekends, selling houses and lots in the development.

As we know two-thirds of a century later, not all of this real estate dream came true — though a lot of it did.
Only the Connecticut portion of Eight Lakes Estates was ever developed — today’s Mamanasco Road, First through 12th Lanes, Walnut Hill Road, Birch Court, Rock Road, Scott Ridge Road, Blue Ridge Road, Caudatowa Drive, Sleepy Hollow Road, Round Lake Road, and the west ends of both Barrack Hill and Old Sib Roads.
Those roads served more than 400  lots carved out of around 500 of 1,750 advertised acres. Virtually all of the New York side of the old Port of Missing Men resort — some 1,250 acres — was acquired by Westchester County and turned into the Mountain Lakes Park in North Salem.
Which means that only three of the “eight lakes” are in the Eight Lakes Estates: Lake Mamanasco, Hidden Lake, and Round Pond (which the real estate folk deemed too lowly a name and changed to Round Lake; fortunately, the town has stuck with the original 1700s name of Round Pond).
The other “lakes” in New York — mostly big ponds — are Mirror, Laurel, Pine, Deer, and 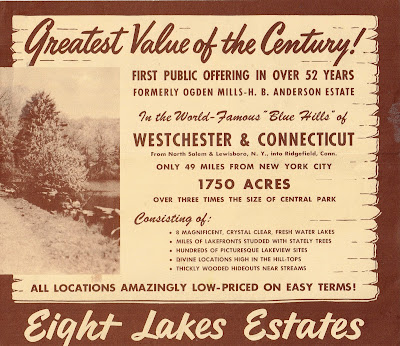 Rippowam, as the brochure points out. Lake Rippowam is in fact large enough to be a lake, but not a lot of the old Eight Lakes Estates property bordered it.

The language of the brochure is seducing, especially to anyone tired of the noise, grit and crowding of 1950s New York.
“Astonishingly low prices prevail on lakefront estates bedecked with beautiful trees and estates nestling midst Pines and Cedars overlooking the lakes,” it promises. “Superb low-cost locations are limitless even to hideouts for cabins, near lakes and streams. Those wishing to live real high-up will find Sky-toppers in the famous ‘Blue Hills’ or along a road which winds up to great heights.” (There is no record of a place in Ridgefield known as the Blue Hills, much less a place famous as it, but the developers named Blue Ridge Road apparently to celebrate those unknown hills.)
The map in the brochure will bring back memories of the days, before the Interstates, when

the way to get from New York to Ridgefield was via the Saw Mill River Parkway — complete with the infamous Hawthorne Traffic Circle — or the Hutch to the Merritt. Note that the “model house” for Eight Lakes was on the west side of Mamanasco Road.

The brochure includes quite a bit of history of the property, which is fairly accurate. However, one might not term it a “Believe It Or Not” fact that millionaires once owned the land; much of Ridgefield in the early 20th Century was estates owned by millionaires.
All that said, Eight Lakes proved to be a great place for many families looking for an affordable home in the suburbs that wasn’t on a cookie-cutter lot. Countless kids grew up in the Eight Lakes neighborhoods with plenty of woods, streams and ponds to explore, and much fresh air to breathe.
It may not have been “another Tuxedo Park,” but it’s been a wonderful place for a simple country home.