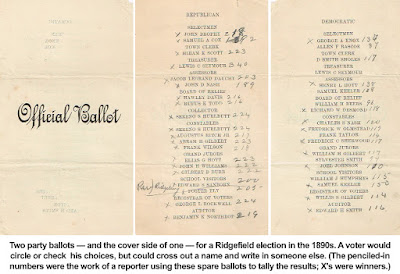 
Today is Election Day, and Ridgefielders are going to the polls to select a variety of public officials. They will do so using a method that combines systems both quite ancient and quite modern.
Ridgefield essentially uses paper ballots, a method that’s been around since ancient Rome. But instead of writing out the names of the people we want for each office on a piece of paper, as Romans and early Americans did, we blacken boxes next to their already printed names.
The pre-printed paper ballot began to be used in the middle 1800s, but the new twist is that instead of human eyes tallying the results of our choices, computers do the job. We feed our ballots into a high-tech machine that scans and counts all our votes.
From the mid-1800s until 1914, Ridgefielders turned in ballots that had the names of candidates printed on them, to be viewed and counted by election officials. Ballots could be pre-printed or entirely hand-written. One pre-printed ballot was provided by the Republican Party for Republicans and one by the Democratic Party for Democrats.
The technique of pre-printing ballots allowed each party to encourage their members to “vote the party line.”  Just check off everyone on our list of names and you’re done!
However, a Republican voter using a Republican ballot could legally cross out a Republican name and instead insert the name of a Democrat — or any local citizen — for a given office. And, of course, Democrats could do the same switch on their ballots.
To make that possibility more difficult, parties started printing their ballots with the names of the candidates close together to make it hard to squeeze in a new name. Such may be the case with the late-1890s ballots that accompany this article.
The alternative to using a party ballot was to write out in longhand all your selections for elected officers on a blank ballot. That’s what unaffiliated voters did or what party members who liked to split their votes between the two parties’ candidates might do.
The arrival of voting machines in 1914 made it much easier and quicker for people to vote for the person instead of the party. The voter could simply push down a lever over the name of the candidate desired.
However, to appease party leaders — who didn’t want to lose the opportunity for people to vote “the party line,” voting machines included a special lever that allowed voters to, with one flick, select every Republican or every Democrat. Not only party bosses but lazy voters liked that.
Those machines were mechanical, consisting of a complex system of rods, switches, gears, and drums. However, each included a roll of paper, and, through a slot on the face of the machine, one could write in the names of people not on the ballot — just as one could write in candidates 200 years ago.
In 2007, Ridgefield introduced the current voting system, using paper ballots  read by computers. The system was almost instantly cheered by both voters and by the election officials who disliked dealing with the clunky old mechanical machines.
Unlike many localities’ super-high-tech, all-electronic, paperless voting, Ridgefield’s system has a “paper trail.” You fill out your paper ballot and feed it into a tallying computer. If the computer fails or the election is challenged, all of the paper ballots still exist and can be recounted — by human eyes, if need be.
And it’s a system virtually impossible for Russians — or anyone else — to hack!