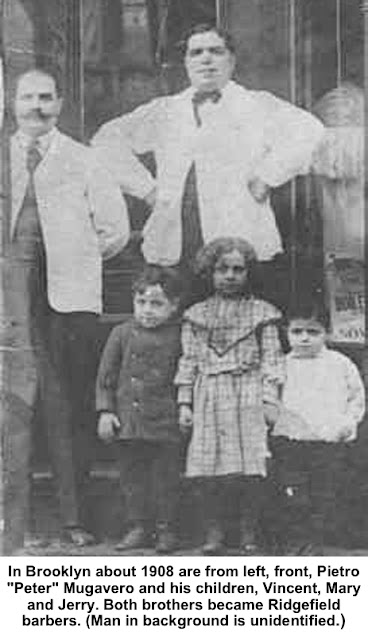 The Mugavero Family:
A Tonsorial Dynasty
Theirs is a dynasty of haircutting expertise. For nearly a century, members of the Mugavero family have been cutting the hair of Ridgefielders. But their tonsorial tradition goes back long before they came to Ridgefield.
In 1891, a young man named Pietro Mugavero came to this country from Italy and soon established his own barber shop in Brooklyn, N.Y., and soon a second shop in Manhattan.
There is a belief in the family that Pietro’s father back in Italy may have been a barber and perhaps even earlier generations practiced the profession. 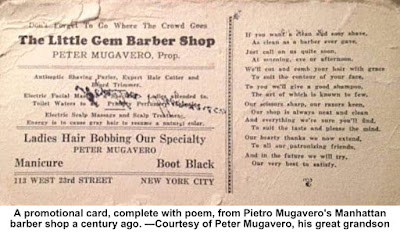 In 1900 Pietro or “Peter” married Agatha Vitali, also from Italy, and two years later, Vincent was born. In 1904, Jerome “Jerry” Mugavero arrived.
Vincent graduated from Brooklyn Polytechnic Institute in 1924 and decided to enter the profession of his father. He eventually moved to Norwalk where he had relatives, and then, in 1931, he bought the Ridgefield Tonsorial Parlor on the east side of Main Street north of Bailey Avenue. He was soon joined by his younger brother, Jerry. 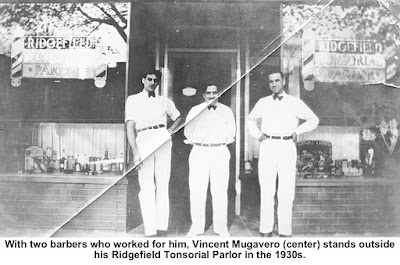 In 1938, Vincent decided on a change of careers. He left barbering and, with his wife Bernice,  eventually opened the B-V Ranch restaurant on Route 7, just north of Topstone Road. (After he retired around 1962, the restaurant became The Alibi, which burned down in the 1970s. The site is now an empty, reforested lot.)
Vincent was active in the community, serving on the Board of Assessors, the Republican Town Committee, and as a volunteer fireman for more than a half century. He lived in Ridgefield for 37 years and then moved to Redding where he was also involved in community service. 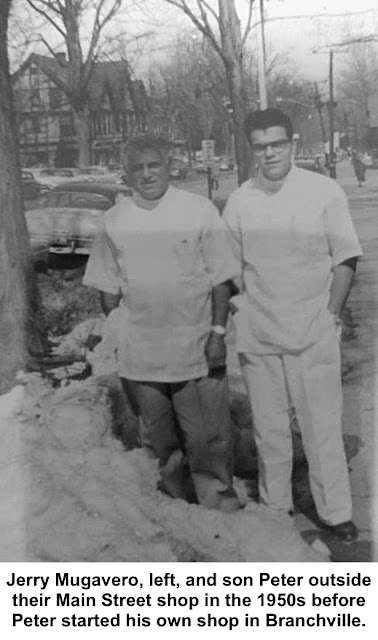 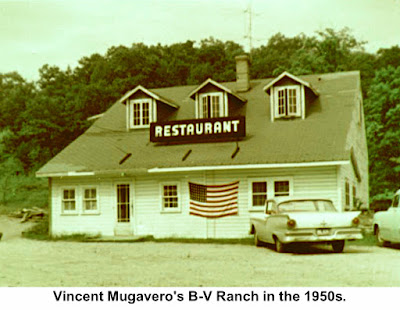 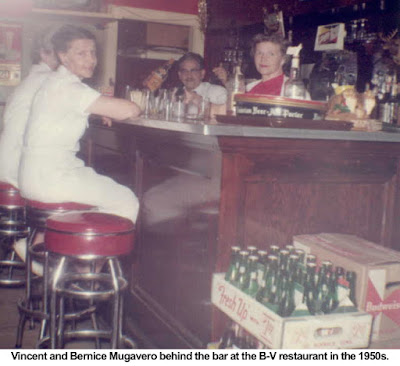 Meanwhile, after Vincent left the business, Jerry Mugavero continued the Ridgefield Tonsorial Parlor with Francis Sansevieri, but in 1950, the two split up and Jerry opened his own business, Jerry’s Barber Shop in the Masonic Building. He eventually took on a partner, Mike Pontello — Mike was married to Jerry’s daughter, Agatha, better known as “Tina” (the flagpole in front of town hall is a memorial to Tina Mugavero Pontello, a gift to the town from her husband.)  Mike Pontello took over the Main Street shop when Jerry retired in 1970 after 50 years as a barber. 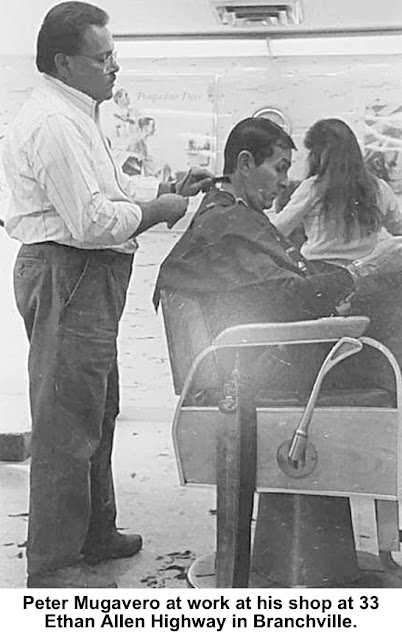 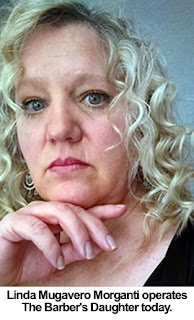 Although he worked in the center of town, Jerry lived in Branchville (his house at 25 Ethan Allen Highway is still standing, used today as offices for American Irrigation Systems). Active in the Branchville community, Jerry was a founding member of the Branchville Civic Association, which built the ballfield on Playground Road; served as an auxiliary state policeman; was a member of the Board of Assessors and the Branchville School Building Committee; and was a president of the Italian-American Mutual Aid Society. He died in 1988 at the age of 83.
Jerry’s son, Peter, began barbering with his dad in the late 1950s, but in 1961, he established his own Peter’s Barber Shop in the Ancona shopping plaza. He then moved to nearby 33 Ethan Allen Highway — just north of his parents’ house. There, he renamed the business, “Peter’s Mane Concern.” Peter retired in 2005 and with his wife, Leslie, moved to Florida where they live today.
But that’s hardly the end of the Mugavero tonsorial dynasty. In the 1990s, Peter’s daughter, Linda Mugavero Morganti, began working alongside her dad at Peter’s Mane Concern. When her father retired, Linda took over the business and today operates the  shop, appropriately named “The Barber’s Daughter,” at 723 Branchville Road.
She is the fourth generation in America and the third generation in Ridgefield to practice the profession.