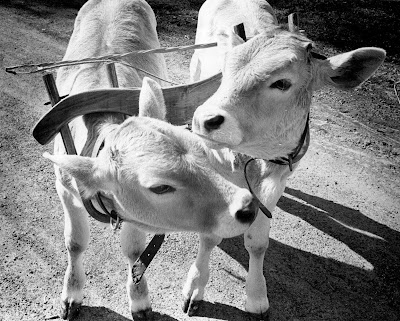 Jeb and Dan
Many Ridgefielders and former residents who were here for the Bicentennial celebration and the 200th anniversary of the Battle of Ridgefield will remember Jeb and Dan.
The oxen were “members” of the Fifth Connecticut Regiment, the Ridgefield-based group that recreated a military outfit that had existed in the Revolution.
The animals were acquired late in 1974 and appeared in many parades and re-enactments here and in the Northeast. Their main job was to pull the Fifth’s cannon.
Jeb and Dan were cared for by Dave Hebert, who was the Parks and Recreation superintendent in the early and mid-1970s. Hebert lived in a town-owned cottage at Richardson Park on North Salem Road, where the oxen also stayed.
This picture was taken in March 1975 by Perry Ruben. Perry (a woman) lived in Georgetown and did a lot of photography for The Ridgefield Press and Redding Pilot in that era.
She writes on the back of this picture: “Dan and Jeb have changed places and are now steers — young oxen. They have calmed considerably under Mr. Hebert’s steady training, and now stand still on order when the ox-goad is laid on their shoulders. Dan holds his head lower, is bigger and will be the better ox.”
After the hoop-la of the Bicentennial in 1976 and battle anniversary a year later, Jeb and Dan got fewer assignments. And around then Hebert left his Ridgefield post to work elsewhere.
So Jeb and Dan did what many Revolutionary soldiers did after the war: They became farmers. Well, they portrayed farmers, living on the farm of the Stamford Museum and Nature Center, where thousands of visiting children got to see them in an agricultural setting.
The last mention we could find of them occurred in 1982 when they were still part of the museum farm. Since oxen can live for 20 years, we assume they continued to reside there or were moved to a real farm where they grazed peacefully for the rest of their days.