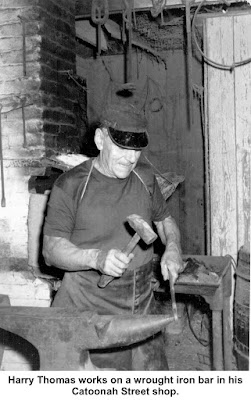 Dick’s Dispatch #120
Harry And The Hooves
By Richard E.Venus
When we left off in our story, Harry [Thomas] was in the process of recuperating from a kick in the head, that had been delivered by a wild horse. During this period he must have wondered whether or not he was engaged in the right business. His excellent physical condition was a big factor in his recovery and the doctor suggested that he find less arduous work until his health was fully restored.
The Ox Ridge Hunt Club in Darien was looking for a farrier at the time so Harry closed his shop on Olmstead Lane and took the job. After wrestling with the great draft horses, shoeing the sleek little polo ponies was just a snap for Harry.
We have seen farriers who felt that it was only necessary to cut down the horse’s hoofs and nail on the shoes. Harry was a perfectionist and settled for nothing less than a first-class job.
After removing the worn shoes, he would carefully cut and shape the hoof, just so. He would take his heavy rasp and smooth the bottom and the outer walls of the hoof. The new shoe was then placed on the hoof to size it up. The shoe was then placed in the forge and shaped until it fit the hoof perfectly.
The shoe would be red hot when Harry removed it from the forge and when he placed it on the anvil he knew exactly where to apply his hammer in order to bend it to the correct shape.
Sometimes calks were applied to the toes and heels of the shoe, to prevent the horse from slipping. The shoe was then subjected to more heat from the forge and while it was still hot, several trips would be made back and forth between the hoof and the forge to make sure that the shoe fit perfectly.
The hot shoe would burn the hoof in each instance as Harry blew away the smoke so as to observe the fit. This all looked very barbaric but really was not and caused no pain or discomfort to the horse.
To carry the shoe back and forth during this ﬁtting procedure, Harry used a punch that had a rectangular point and was inserted into one of the nail holes in the shoe. When he was entirely satisfied with the ﬁt of the shoe Harry would again use this punch to clear all the nail holes in the shoe.
The punch would be set in a nail hole and then tapped with the hammer until the hole was large enough to accommodate the rectangular shaft of the horseshoe nail. Between the clearing of each hole, the punch was inserted in a hole in the large wooden block on which the anvil was set. Into this hole a piece of suet had been packed. I suppose this was to facilitate the removal of the punch from the shoe after each nail hole had been cleared.
Whatever the reason, this maneuver added to the many delightful aromas one could encounter in a blacksmith shop as the punch was hot enough to melt the suet and a gentle little cloud of smoke would arise from the anvil as each nail hole was cleared.
There were eight nail holes, four on each side of the shoe. Actually Harry only used seven nails. The back hole on the inside of each hoof was not filled as there was the danger of drawing blood because of the location on the wall of the hoof. Harry was so expert at nailing the shoe that the eighth nail was not really needed.
There was a saying that went something like this, “For want of a nail, a shoe was lost and for want of a shoe, a hoof was lost and for want of a hoof a horse was lost,” etc. This did not apply to Harry’s workmanship and we do not recall any of his horses ever “throwing a shoe.”
As each nail came through the hoof as it was being nailed, Harry would twist off the end of the nail, leaving about three eighths of an inch of the nail to be bent over and “clinched.”
Before clinching the end of the nail he would carefully prepare a place for the clincher by using his rasp to make a little receptacle on the side of the hoof to receive it. He was so careful and painstaking in doing this that when the job was completed, the hoof was as smooth as it could possibly be.
If a horse’s hoof could be considered beautiful, then it would have to be said that when Harry was through, the hoof could be considered a thing of beauty. I think even the horses were proud of the way they looked and they probably stepped a little higher.
There were times when a horse may have had a hoof problem and Harry was expected to correct whatever it might be. Sometimes the frog of the hoof became tender or it might have an infection. The hoof might also have become dry or brittle.
Harry would cut a piece of leather to fit the shoe and before nailing the shoe he would stuff 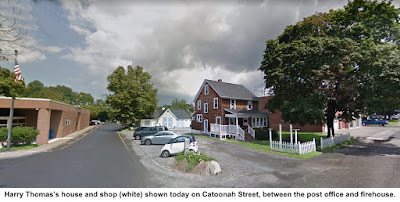 pine tar and oakum into the bottom of the hoof. The piece of leather would then be placed over this concoction to hold it in place and the shoe was then nailed over it to keep the leather in place.

This must have felt good as we can remember a horse that was very sore, looking at Harry when be had completed his errand of mercy with a look of gratitude. Harry must have sensed it as well and it is doubtful if any man before or since ever thoroughly enjoyed his own work as much as he did.
Harry was very proficient at correcting many problems that afflicted horses. The speedy driving horses seemed to be particularly susceptible to overreaching (striking their front hooves with their rear hooves as they trotted) or interfering (striking one front hoof with the other or one rear hoof with the other). Harry would correct this by making a shoe with more weight in one area than another to make the horse throw his hoof away from whatever he was striking. Many times this resulted in some very funny shaped horseshoes.
Dr. Edwin B. Van Saun had a bay driving horse that was exceptionally fast. He used to enter it in the Sunday afternoon races on Main Street, along with William R. Keeler, Henry C. Swords, George G. Haven, Edward Payson Dutton, and others. Doctor Van Saun’s horse had a real problem with interfering and Harry was charged with correcting his stride to eliminate this serious problem.
Harry was a very patient man and this assignment would test his patience to the limit. He must have made at least 15 different shoes before ﬁnally correcting the interference. The shoe that eventually would prove to be successful hung in the blacksmith shop for many years after the horse was gone as proof of Harry’s uncanny ability. It sure did not look like a horseshoe and caused many a comment but it enabled Van Saun to beat Haven and the great dentist was always loud in his praise of Harry M. Thomas.