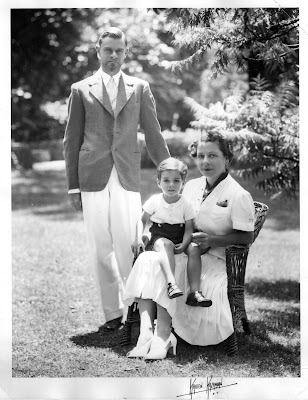 The Colts of High Ridge
This handsome family portrait shows Harris Dunscombe Colt Jr. and his wife, Teresa Strickland Colt, with their son Harris George Strickland Colt, at their High Ridge home around 1937. Little Harris became  a memorable character on the New York City bookselling scene, the subject of a biography flatteringly reviewed by The New York Times.
H. Dunscomb Colt was an internationally known archaeologist who specialized in Middle Eastern deserts. Also an expert on Rudyard Kipling and a noted collector of old engraved views of New York City, he is profiled in a Who Was Who biography posted here (search “Dunscomb” to find it).
The Colts lived at 15 High Ridge, the Peter Parley House. This picture was taken by the then well-known Kaiden-Kazanjian Studios from New York.
Teresa Colt died in 1955 and two years later Dunscomb married Armida Maria-Theresa Bologna Walsh, a native of Trieste. After his death she donated thousands of items in her husband’s archaeological, engraving and Kipling collections to museums and libraries in the U.S. and Europe. Many ancient pieces were given to the Metropolitan Museum of Art in New York.
Armida died in Washington, D.C., in 2011 at the age of 99.
Little Harris, born in 1935, went on to graduate from Princeton and become a financial analyst on Wall Street with J.P. Morgan, Dean Witter and Auerbach Pollok & Richardson.  He lost his Wall Street job in 1975 and decided that was the chance to follow his dream. An avid student of history who read many books about Napoleon in French, he opened The Military Bookman, a New York City store specializing in military books and items related to the military.
His wife, Margaretta, “joined him in this endeavor, even though it meant wrangling with a predominately male customer base, including ‘Soldier of Fortune’ types and even some with ‘SS tendencies,’” wrote the New York Times’s Dwight Garner, reviewing her book, “Martial Bliss, The Story of the Military Bookman,” in 2015.
A “pleasure of Ms. Colt’s book is feasting on details about the store’s offbeat band of customers: the regulars, the cranks, the autodidacts, the dandies, the lurkers, the charmers, the cheats, the mouth-breathing Soldier of Fortune types,”   Garner said.
“Historians and journalists were devoted to the store, and leaned on it for their research. ... George C. Scott was a patron of the store. So were Paul Newman, Robin Williams, Bette Midler, and James Gandolfini. Richard Nixon’s office rang for books. The talent agent Michael Ovitz dropped in to buy a pile of gifts for Tom Clancy. The store became a hangout, a bookish ‘Cheers.’ ”
Garner was disappointed that the book did not have more about Harris Colt or the author herself. “We don’t learn a great deal about her or her husband’s lives before they wed in middle age,” he wrote. “She was tall and willowy; he was short and alert. In photographs, they put you in mind of Julia Child and her husband, Paul. What information there is about Mr. Colt arrives only haphazardly. He coxed crew at Princeton, for example, and collected Napoleonic sabers. Nor do we learn from this book the sad news that this man, who cuts such a warm and witty figure here, died in 2004.”
The Military Bookman closed in 2003, although today there is a store of the same name in Manhattan, operated by Chartwell Booksellers.

By odd coincidence, Harris Dunscomb Colt was the grandson of Harris Colt and Eliza Catherine Dunscomb. Eliza's brother, John Godfrey Dunscombe, married Katharine Dunbar Stuart. Katharine a descendant of the same Colt family Harris descended from (they were second cousins twice removed - see chart at https://dunscombe.info/ui552.htm) and Katharine was the grand-niece of Samuel Griswold Goodrich (Peter Parley) a prior owner of the house.