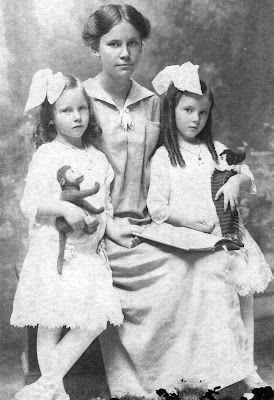 The Allee Sisters
This charming portrait shows the Allee sisters, Jean Harriet (left) and Dorothy Diemar (right) with an unnamed nurse, probably around 1916. Jean is holding a monkey and Dorothy, what appears to be a clown  — they may have been favorite toys or just props provided by the photographer, Joseph Hartmann.
The sisters were the daughters of Dr. and Mrs. William Allee, who lived at 304 Main Street at the southern corner of Market Street. After the doctor’s death in 1927, Mrs. Allee married James Van Allen Shields and became Laura Curie Allee Shields. (She wrote a 300+-page autobiography, “Memories,” with many glimpses of early 20th Century Ridgefield.)
Dorothy (1909-96) married August J. Detzer Jr. (1898-1976), a Navy captain who served in World Wars I and II, as well as Korea, and owned radio stations WINE-AM and WGHF-FM in Brookfield. (WINE is still around at 940 kHz, but WGHF is now WRKI, long called “I-95 Radio.”) The Detzers lived in the family homestead at 304 Main Street for some years.
Jean (1908-90) married Graham Ford Dawson (1910-95), and moved to New Zealand, where she spent the rest of her life.
The Allee/Shields house still stands (and was just sold in November). Laura Shields lived there until her death in 1968 and so did her daughter Dorothy and son-in-law. After Capt. Detzer’s death, Dorothy Detzer moved to Bayberry Hill Road, where she lived for many years, and then spent her last years at Casagmo.