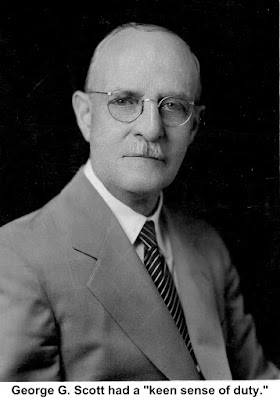 Judge George Scott:
A Good Paperhanger
George Scott was the ultimate home-town boy. Descended from the earliest settlers of Ridgefield and a son of perhaps the most influential community leader of the 19th Century, Scott lived a civic-minded life, running several local businesses and holding several major town offices for many years.
But after World War II broke out, he did something rather unusual: He volunteered to serve — at the age of 71.
George Gorham Scott was born in Ridgefield in 1871, a son of Col. and Mrs. Hiram Keeler Scott. His influential father was a major leader of the community. A Main Street merchant, Col. Scott founded in the 1850s what is today’s Bissell Pharmacy — the oldest locally owned business in town today. As a boy George worked for his dad at the store.
As a young man George Scott sought adventure and headed west. He established a painting and decorating business in San Francisco for a few years and, in 1893, joined in the gold rush at Cripple Creek, Colo. But soon he headed back home to Ridgefield, where he continued his painting and decorating business. However, the arrival of that new fangled machine, the automobile, prompted him to go into the car business. He had a dealership on Main Street where, until recently, Cheers and, previously, Liberta’s liquor store was. He also had an insurance business.
Community service was in his blood. He was a longtime member of the Board of Education, was town assessor, a registrar of voters and a member of building committees that expanded the East Ridge School (“old high school”) in 1925 and in 1939.
In 1924, he was elected Ridgefield’s town clerk, a post that his father had held for 46 years. Son George lasted 44 years, retiring in 1948.
Also in 1924 he was elected judge of probate, another job his dad had held, and he remained in that office until the mandatory retirement age of 70, reached in 1942.
“In all of his activities, Judge Scott has been impelled by high ideals and a keen sense of duty and honor,” The Ridgefield Press said in a 1932 profile of him. “Ridgefield has every right to be proud of such a valuable citizen.”
Perhaps it should be of no surprise then that, in 1942, the year he retired as probate judge, Scott wrote a rather remarkable letter to the War Department in Washington, D.C.
“I am 71 years of age, but I feel like 30 and want to do anything that I can to help in this war effort,” Scott wrote. 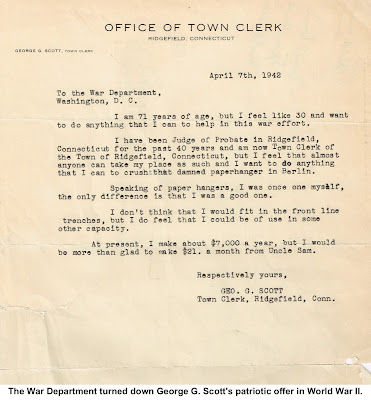 “I have been Judge of Probate in Ridgefield, Connecticut for the past 40 years and am now Town Clerk of the Town of Ridgefield, Connecticut, but I feel that almost anyone can take my places as such and I want to do anything that I can to crush that damned paperhanger in Berlin.
“Speaking of paper hangers, I was once one myself, the only difference is that I was a good one.
“I don’t think that I would fit in the front line trenches, but I do feel that I could be of use in some other capacity.
“At present I make about $7,000 a year, but I would be more than glad to make $21 a month from Uncle Sam.”
The War Department turned down his offer. Presumably, they did so politely and with a great appreciation.
George Scott died in 1957 at the age of 85.
Scott may have had the look of a prim and proper bureaucrat, but he was hardly stodgy. Each day in the 1930s he would walk to the office, accompanied by his dog, Tippy, a poodle mix.
Scott had a special platform affixed to the sill of a front window in the town clerk’s office, allowing Tippy to rest and watch the passing scene outside. When people walked into the town hall, Tippy would invariably jump down and greet them, giving any offered hand a friendly lick.