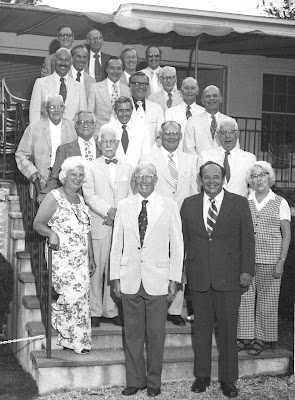 A Bunch of Bankers
This happy-looking group of people is actually a sort of Who’s Who of Ridgefield’s business community during the last half of the 20th Century.
The photograph by Clarence “Korky” Korker was taken in July 1975 at the Silver Spring Country Club and shows a gathering of the directors and corporators of the Ridgefield Savings Bank (now Fairfield County Bank).
From left, starting with those in front and going back, sort of in rows: Town Clerk Ruth Hurzeler, bank Chairman Carleton A. Scofield, President Charles Coles, and May Piser (bank treasurer?); Octavius “Tabby” Carboni, Robert A. Lee (bow tie), Abraham Morelli Sr., and Judge Hjalmar Anderson of Redding; D. Harvey Valden (no tie), Dr. Philip L. Martin, and Judge Reed F. Shields; N. Donald Edwards, Robert Wilder, unidentiﬁed, Walter E. Evans (in dark shirt), former first selectman J. Mortimer Woodcock, and Ralph B. Crouchley; Paul S. McNamara (shaded glasses), Judge Joseph H. Donnelly, Lawrence W. Hoyt Jr., and Edwin B. Allan (shaded glasses).
Incidentally, Paul McNamara is one of only two people in this picture still living (the other is Larry Hoyt; we don’t know about the status of “unidentified.”)
McNamara just retired last July after 31 years as chairman of the board of the bank. According to a press release at the time, “Mr. McNamara has seen the bank grow from 2 to 17 branches and from $98 million in assets to $1.5 billion.  Capital has grown from $8 million to $200 million over his tenure. He orchestrated the Ridgefield and Fairfield County Savings Bank merger along with the bank’s expansion into insurance with the Carnall Insurance acquisition (Fairfield County Bank Insurance Services today) and the introduction of investments with the launch of Fairfield County Financial Services.”
In May 2019 he and his wife, Dewey, are slated to receive the Ridgefield Library’s “Hope H. Swenson Visionary Award.” Said the library: “As chairman of Fairfield County Bank since 1987, McNamara spearheaded over $1 million in donations to local organizations annually. Throughout his long career he has been instrumental in creating economic growth and opportunity in this area and beyond through the development and support of individuals, local entrepreneurs and businesses.”