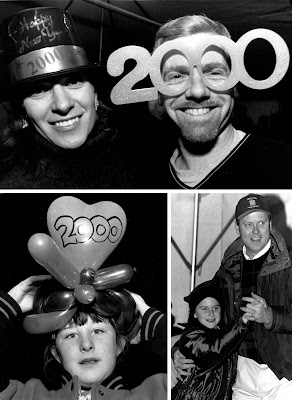 Happy New Millennium!
On this first day of 2019, we offer a look back 19 years to when Ridgefield celebrated a rather rare event: A new millennium.
These pictures by Scott Mullin were taken New Millennium’s Eve, Dec. 31, 1999, at the Community Center grounds where a big bash was underway. The all-day festivities included nearly a dozen concerts under several  tents in Veterans Park, food, dancing and, at midnight, fireworks and the ringing of the town’s churches’ bells. Thousands of people participated.
Shown here at the Community Center that evening are, top, Suanne and JP Laqueur, lower left, eight-year-old Alycia Hudson with her balloon hat, and lower right, Mike Harney and daughter Caitlin, 9, dancing.
The weather was cold but clear, and not many people seemed all that worried about the  , the Millennium Bug, also known as the Y2K problem, which computer experts had warned for years could shut down the power grid and other computer-controlled operations at midnight, when many computer programs supposedly would not be able to recognize the new date.
The shutdowns didn’t happen, and life went on, with the biggest problem being people remembering that there’s a 2 at the beginning of the year, instead of a 1, when writing a check.