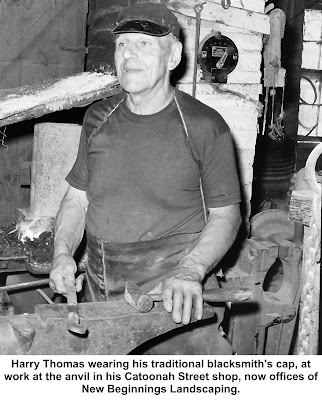 Under the spreading chestnut tree,
the Village Smithy stands.
The smith, a mighty man is he,
with large and sinewy hands,
and the muscles of his brawny arms,
are strong as iron bands.

It was 143 years ago that Henry Wadsworth Longfellow wrote his famous poem. That was 43 years before Harry Marvin Thomas was born, so we can not say that the great poet had Harry in mind, when he composed it. Yet, the description of the village smithy ﬁt Harry to a T, especially the references to his honesty and sterling character.
I was less than ten years of age when l first met Harry Thomas and a friendship began that was to last all those many years. Harry enjoyed a great reputation for miles around and we felt very privileged to be included in his circle of friends. When he passed on, just a few years ago, in his 89th year, he was the last of Ridgefield’s many blacksmiths. Just a few years later his wife Minolia, followed him to her reward at the age of 96.
Harry Thomas was a descendent of Benjamin Stebbins, one of Ridgefield's very earliest settlers. Members of the famous Stebbins family lived where Casagmo is now for almost 200 years.  Harry’s father, George M. Thomas, was a conductor on the railroad branch that ran from here to Branchville. George was only 27 when he was crushed to death while assisting the brakeman in the coupling of two railroad cars.
As reported in an earlier column, the business of hooking the railroad cars together was probably the most dangerous part of railroading. This tragic accident left Mrs. Thomas with  the task of raising three children, a daughter, Edna, and two sons, Harry and Howard.
Howard will probably be best remembered as the proprietor of the West Lane grocery, where Gene Casagrande has his CasaMore store today. Sports enthusiasts will recall how Howard made those great left-handed shots in basketball games at the old town hall. For some reason, Howard would always shout “Hey” as he unerringly made those shots from either side of the court.
Harry and Minolia had three daughters, Gertrude, Esther and Marie. Gertrude is now Mrs. Lawrence Hoyt and still lives on Silver Spring Road. The Hoyts' daughter, Doris, is Mrs. George Ventres and the Ventres’son Dale is proprietor of the Ridgefield Power Equipment Shop. So Dale can easily trace his lineage back to 1714, when Benjamin Stebbins came to town.
The Thomas family has had an active participation in town affairs for many years. Harry's great grandfather, Albert N. Thomas, was town clerk for Ridgefield back in Civil War days. Albert was also an original member of the Library Club, which formed a nucleus for our present Ridgefield Library.
Albert’s son Elijah L. Thomas (grandfather of Harry) succeeded his father as town clerk and also served as a judge of probate for the town. All this would seem to indicate that the Thomas family were pretty solid citizens.
At the time Harry's father suffered his fatal accident, there was no such thing as Social Security to assist Mrs.Thomas in raising her three children. When Harry was 16 he went to Purdy's Station, near Brewster, N.Y., to learn the blacksmith and farrier trades.
Perhaps we should explain for those not familiar, that a farrier is a shoer of horses, whereas, a blacksmith performs all kinds of iron work and may also engage in horseshoeing.
During his years at Purdy’s, Harry worked 12 hours each day and six days each week. The shop opened at six in the morning and normally closed at six in the evening. However, if six o’clock came around and there were still horses to be shod, the farriers continued to work until they were done.
Harry was a religious man and always looked forward to Sunday. After church services he would walk the 15 miles to Ridgefield to visit his mother. He would time his return walk to Purdy’s so that he would arrive in time for work on Monday morning.
Harry Thomas was the greatest walker we ever saw and even in his late 70's, he would think 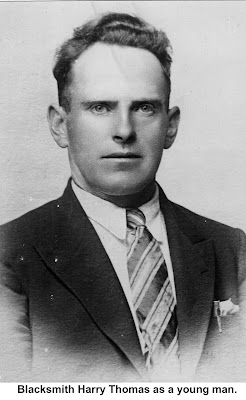 nothing of a Sunday walk to Danbury or Brewster. Though he was of average height, his long strides were as great as those of the long-legged giants that play basketball today. He was often offered a ride but would always, graciously, turn it down and then many times he would keep pace with the horse, whose driver had offered the ride.

Ridgefield had several real good walkers. Frank Parks Jr. took very quick steps, when he was a young man and Earl Hibbart had a very smooth and graceful stride, but they could not keep pace with Harry Thomas.
He was by nature, a very friendly man, but always walked alone, for no one could keep up with those great strides. He got over the ground, at a walk, just as fast as some of the joggers that I see on the highway.
Harry was born in the old Bailey Inn that was located on Main Street on the west side almost directly across from where the Christian Science Church is now. Before he and his family moved to their new home, next to the firehouse, he walked daily from his home in Flat Rock near the Wilton town line.
He rarely wore a jacket, except in real cold weather and very seldom was seen with a hat, although when he got to his shop he would don the little black cap with the shiny visor that was the trademark of the smithy.
After Harry had finished his apprenticeship at Purdy’s, he returned to Ridgefield and worked at the Big Shop for a short time. The Big Shop was, as everyone knows, at the rear of the Allan Block, where it had been moved from the corner of West Lane and Main Street, to make room for the Congregational Church. Today the old building is home to a multitude of enterprises, but at the time it served as a blacksmith shop and a carriage shop.
Soon Harry was able to open his own little blacksmith shop. It was located on the Rufus Seymour lot on Olmstead Lane about opposite from where the Piser family now lives. It was while he had this shop that he almost lost his life.
When you brought in a horse to be shod, Harry would never refuse to tackle the job, no matter how bad or unruly the horse might be. He was shoeing a real wild horse one day when he received a kick in the head that Dr. Bryon said would have been fatal if it were one half inch closer to a vital spot. Fortunately Harry was in excellent physical condition and recovered.
[The next  column will continue the story of Harry Thomas. Dick Venus, who became Ridgefield’s first town historian, wrote 365 “Dick’s Dispatch” columns for the Ridgefield Press, telling about life in Ridgefield during the first half of the 20th Century. This column appeared Sept. 27, 1984.].