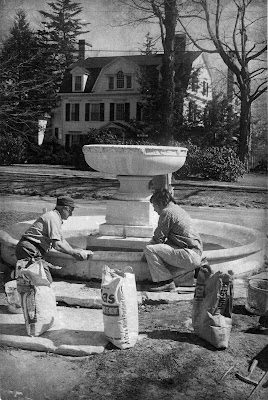 Fixing A Fractured Fountain
The Cass Gilbert Fountain has often been damaged by errant autos, but the winter of 1975-76 was a particularly rough time for the venerable and vulnerable monument. During the five months from November 1975 until March 1976, it was struck by cars at least three times.
The most serious crash occurred in December when the fountain was hit by a car that then left the scene. The driver was later  arrested and his insurance company made to pay for repairs.
Here, in late March 1976, we see Primo Polverari of Stonecrest Road, left, with his son, Bill, working on fixing the fractured fountain. Hidden behind the fountain is another helper, Jimmy Vozzo. They had relaid the base, which holds water, and patched it with a special mixture of white cement and marble dust.
One of the region’s top stonemasons, Primo Polverari believed the marble from which the fountain was fashioned came from Italy. One large slab was split in two in an accident that occurred many years earlier, but otherwise the stonework was in pretty good shape, he said.
Poverari felt strongly that the fountain should be protected, either by some form of durable fencing, or by moving it to another site, as had been suggested often in the past — especially by the the State Highway Department, which hates that intersection.
Dave Hebert, then the superintendent of Parks and Recreation which takes care of the fountain, agreed that something needed to be done to protect the monument. “I don’t think it can take much more pounding,” he told The Ridgefield Press.
However, Hebert felt that if a fence were erected, it should be of a low and attractive design. “I don’t want anything to take away from the appearance of the fountain,” he said.
Hebert asked the Planning and Zoning Commission’s Architectural Advisory Committee to suggest a fence design, possibly a post-and chain arrangement. Most of the cars that manage to hit the structure aren’t traveling very fast, so a low fence should stop most vehicles, he felt.
Someone had suggested to Hebert that the fountain be raised up on a mound of earth so that cars would strike the mound and not the stone. The superintendent felt that would be too expensive, but in fact two decades later — after a drunken driver shattered the fountain in 2003 with a Hummer — it was indeed raised a bit.
However, what has probably helped more than anything is the additional placement of planters holding shrubs around the base of the fountain. Between the concrete walls of the planters and the dirt packed inside, a pretty effective set of bumpers has been created.  Several of the planters have been smashed in accidents, but each time, they managed to keep the cars — in one case, a truck — from hitting the fountain.
Primo Polverari retired a few years later from fountain work; he died in 1996. Much of the repair work in the 1980s and 90s and early 2000s was done or overseen by Dr. Robert Mead, a dentist who lived just north of the Keeler Tavern. He often used some dental techniques to fix the marble.
The fountain was erected in 1915-16, a gift of noted architect Cass Gilbert who lived in what is now the Keeler Tavern Museum.
Appropriately, in 2016, the museum bought Dr. Mead’s brick house to use as its administrative headquarters. That building had been erected in 1936-37 by Julia Gilbert, Cass’s widow,  as a monument and museum to her husband’s works.  It proved too small to handle the mass of papers and pictures that Gilbert left, so the museum was sold as a residence, eventually becoming the home and office of dentist Mead, who thus had more than a passing interest in the well-being of Gilbert’s great gift to the town.