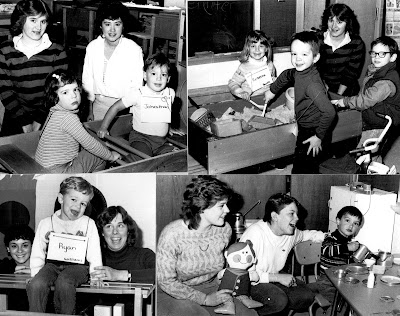 Old Students Teach Young Students
We had an unusual problem: We knew the names of everyone in these four pictures but we didn’t know for sure just where they were and exactly what they were doing.
Could it be the preschool that operated at Ridgefield High School back in the 1980s? Or was it some new private preschool that used RHS students? According to several members of the Old Ridgefield group on Facebook, the answer was definitely the former.
The RHS preschool operated to the advantage of big students who wanted to learn child care, little students who wanted to begin school, and parents who were looking for an inexpensive preschool — probably free!
Shown are, at upper left, Kira Skorpen and Michelle Bellagamba, student teachers and  high school students, with a girl named Murphy and a boy, Jonathan Henry; upper right: student teacher Kira Skorpen with Rebecca Pawlik, Edward Keane, and Chris Hornyak; lower left: Terri Garofalo, Ryan Williams and probably Ryan’s mom, Joan Williams; lower right: Lisa Besse and Tracy Geary with Tom Cofone in the “housekeeping corner.”
The Ridgefield High School alumni directory says Kira Skorpen was a 1986 graduate, and that  Lisa Besse, Michelle Bellagamba, Terri Garofalo, and Tracy Geary were in the Class of 1985, so that pretty much places the pictures in the mid-1980s.