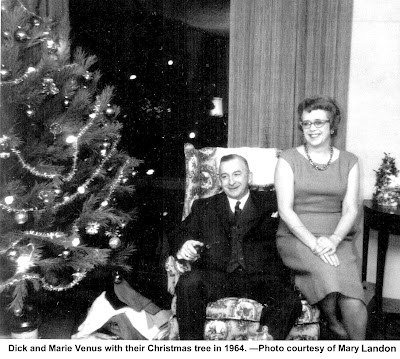 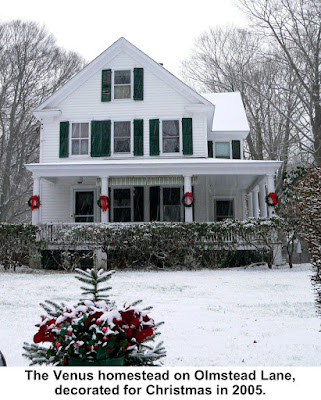 rate, she took a liking to me and bought a chance in a rafﬂe at S.D. Keeler’s store, across the street where Ridgeﬁeld Auto Parts is now. Miss Cooney put my name on the raffle ticket and when I delivered the paper to the store, they informed me that I had won the 25-pound turkey that was offered as a prize.

The store offered to deliver the huge turkey to what was then 181 Main Street (now 612 Main). However, I was so excited that I placed the turkey in my little red wagon and raced home with it. In those days the food given to poultry did not contain the vitamins we have today and a good-sized turkey would be around 15 pounds. I was very proud to have made this contribution to our family's Christmas, but I guess that this monster caused my mother all kinds of problems because of its size.
Also, about this time, Jimmy Begin bought Charles Wade Walker’s “Happy Hour Store” and gave me the job opening the store in the morning. This was a big thing for me and I took my new responsibilities very seriously.
Our original intention was to write a little something about each Christmas and whether or not it was white, from 1920 to the present time. As can be plainly seen, I will not get by the first five years. So perhaps there will be another time.
My mother, my brother Joe, and my daughter Elizabeth Ann were all born during the Christmas season and we always felt that their birthdays suffered a little because of the proximity to the Lord’s birthday.
We thought Lizzie might be a Christmas present but instead she was the ﬁrst baby born in Norwalk Hospital in 1942. The William Roys had beautiful twin girls, Mimi and Margy, born the next day, on January 2. They were good friends of Elizabeth Ann and came to her party one New Year’s Day when they were still little girls. Someone asked them why they were not born on New Year’s Day and Mimi quickly answered, “We would have been, but my Daddy had to go hunting that day.”
We will take this opportunity to wish everyone a happy, healthy, and holy holiday season and a better 1984.

(NOTE: Dick Venus, who became Ridgefield’s first town historian, wrote 365 “Dick’s Dispatch” columns for the Ridgefield Press, telling about life in Ridgefield during the first half of the 20th Century. This column appeared Dec. 22,1983. We plan to publish many of them on Old Ridgefield.)