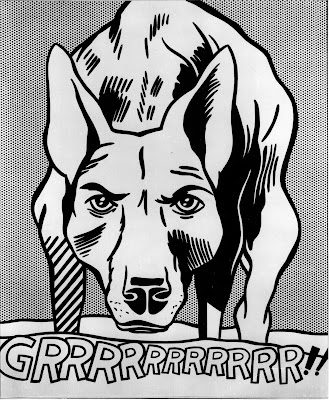 “Grrrrrrrrrrr!!”
This rather arresting painting once spent a summer in Ridgefield and  now resides in a major museum. But almost as interesting as the picture itself is the man who took this photograph  used in publicizing it.
In the summer of 1983 (May 22 to Sept. 11), the Aldrich Museum of Contemporary Art, as it was then called, staged an exhibit called “Changes 1960-1982.” Among the works exhibited was “Grrrrrrrrrrr!!” this  oil-and-magna on canvas by the noted American artist, Roy Lichtenstein (1923-1997).
The Aldrich described the exhibit as “a survey of the development of 13 of America’s most important artists.” Indeed, it was a who’s who of contemporary artists that consisted of, besides Lichtenstein, three works each from Richard Diebenkorn, Helen Frankenthaler, Jasper Johns, Ellsworth Kelly, Agnes Martin, Louise Nevelson, Claes Oldenburg, Robert Rauschenberg, Larry Rivers, James Rosenquist, Frank Stella, and Andy Warhol.
“Grrrrrrrrrrr!!” was painted in 1965, inspired by a panel Lichtenstein saw in a 1962 comic book, “Our Fighting Forces,” published by what is now DC Comics. The artist apparently liked the painting enough that he never sold it and instead bequeathed it to the Solomon R. Guggenheim Museum in New York, where it remains today. The museum used it for promotional posters for its 1993 exhibition, “Roy Lichtenstein: A Retrospective.”
Lichtenstein had earlier done another work of a dog, inspired by “Our Fighting Forces,” called “Arrrrrff.” At a 1996 Christie’s auction, it sold for $420,500.
To promote its exhibit, the Aldrich sent to The Ridgefield Press this black-and-white photograph. (The painting itself is mostly black-and-white, except for the background of the  Grrrrrrrrrrr!!, which is yellow.)
The picture was taken by Rudolph Burckhardt (1914-1999), a noted Swiss-American photographer and filmmaker, who has been the subject of a number of major exhibits himself. Unlike most mass-produced publicity pictures, Burckhardt’s was printed on heavy stock and hand-labeled on the back, “Lichtenstein #160,” presumably by Burckhardt himself, above his stamped photo credit.
Burckhardt, who taught many years at the University of Pennsylvania, was known for his pictures of urban and country life, especially his scenes of New York City in the 1930s and 40s.
He marked his 85th birthday on Aug. 1, 1999, by jumping into a lake on his property in Searsmont, Maine, and drowning.
This photograph was in the archives of The Ridgefield Press and is being donated to the Ridgefield Historical Society, along with many hundreds of other Ridgefield-related pictures.