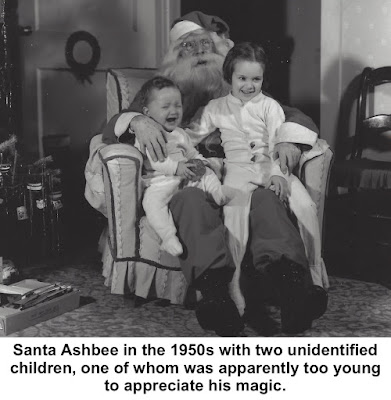 When Charlie Was Santa
By Richard E. Venus
His name was Charles, and most everyone called him Uncle Charlie — that is, except at this time of the year when he became a very famous character, in a bright red suit, and a long white beard. Of course, we are referring to the one and only, Uncle Charlie Ashbee.
More than 60 years ago, Charlie and his wife, the former Ida Smith, lived at 3050 Grand Concourse, in The Bronx. They used to come to Ridgefield quite often to visit the James Smith family on North Salem Road and later at the Smiths’ farm on Barry Avenue. Big Jim Smith was Ida’s brother.
Like everyone else who came to visit in Ridgefield, the Ashbee grew to love our favorite town. Charlie made up his mind and Ida agreed, that when he retired, they would buy a lot and build a home in Ridgefield.
Charlie had been an executive for some 30 years with a large insurance company. The Ashbees were so anxious to get to Ridgefield that Charlie took an early retirement in 1928 at age 55. In those days early retirements were not common, but then Charlie was not common either.
The Ashbees bought a good-sized lot from Arthur Carnall on Wilton Road West. The lot was where the old Ridgefield Fair and Cattle Show took place more than 100 years ago. Then they built what must have been their dream house and it shows that they must have put a lot of
thought to it. It is a very attractive house and few, if any, in our town, are like it.
After living in The Bronx, the place on Wilton Road West must have seemed like a spacious ranch to the Ashbees, when they moved into their new home in early 1929.  Both Charlie and Ida were friendly, outgoing people and they fit right into the social life of their adopted town.
Charlie wasted no time in getting involved in local affairs. About the time he arrived in town, the Promoters Club was being reorganized as the Ridgefield Lions Club. Charlie jumped right in and became one of the original members of the new club. Thirty years later, the Lions Club had a big party at the Inn at Ridgefield. They called it Uncle Charlie’s Night and it was a well deserved tribute to this ﬁne gentleman, for his years of service to the club,  the community as a whole and especially the kids whose lives were made brighter by his annual visits.
It was at a Lions Club Christmas party that Charlie’s role as the man in the red suit began. Someone was needed to act as the man with the long white beard and as usual Charlie volunteered. Little did he, or anyone else, realize that this would develop into a tradition, in a town noted for traditions. He certainly must have been the longest running show in Ridgefield’s history.
Charlie got to be such an important part of the Christmas season that letters addressed to the man at the North Pole were rerouted to him. He would never fail to visit the home of the little kid that wrote the letter. In many cases he was able to locate a toy that a youngster had asked for. When he did he would take it along with him and leave it with the parents, to be put under the tree. Bill Sturges was a great help in this connection as all year long he collected and repaired toys.
To say that the kids loved Charlie would be a gross understatement. Not only the kids, but grownups as well thought that he was just the greatest. Many people who are grandparents today, were visited by Charlie when they themselves were little ones. These people all have fond memories of him.
It was quite a distance from the Ashbee home on Wilton Road West to the business area and when we saw Charlie walking to town each day, we suspected that it was a part of his health program. Such was not the case. What we did not know was that Charlie had never learned to drive a car.
Charlie’s brother-in-law, Big Jim Smith, was a rural mail carrier and when Jim wanted to take some time off, he asked Charlie if he would substitute for him on the mail route. Charlie, agreeable as always, said that he was willing to learn to operate Jim’s old Dodge. The Smiths lived on Barry Avenue where Paul Korker lives now and they had a farm on which there was an orchard. Jim acted as Charlie’s tutor and helped him familiarize himself with the brakes, the steering apparatus, etc., and then took him out into the orchard where he charted a course among the apple trees. Charlie soon mastered the operation of the vehicle and announced that he was ready to deliver the mail.
Jim Smith’s mail route was in the northern section of town and included the Ridgebury area. The houses were a considerable distance apart as this was some time before developments started to spring up. The people along the mail route liked Big Jim, but they considered it a rare treat whenever Charlie filled in for him. Charlie’s personality would be best described as effervescent and the people looked forward to his visits.
Jim Smith had a sideline in which he dealt in furs and collected the hides of foxes, skunks, 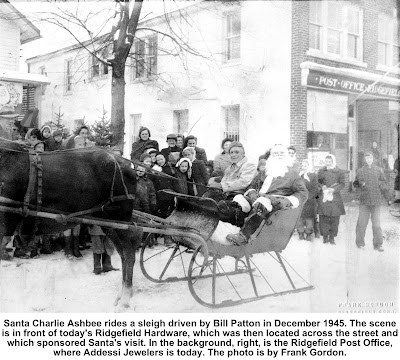 muskrats, raccoons, and rabbits. All of these animals were in abundance along Jim's mail route. Therefore, he established a trap line and set steel traps under each of the many bridges along the way. Jim would check the traps each day anything that he caught was put in the trunk of his car. Charlie was expected to check the traps when he did the mail route. He did stop and examine each one but after doing the route several times, it was noted that he did not bring back any game.

The reason was quite simple. Charlie could not stand the thought of trapping any animal. If he found anything in a trap, he would release it. If there was nothing in the trap, Charlie would spring it so that nothing would be caught in it. He was a kind man.
Charlie never ran for any major elected office in town government. If he had he would have been a shoo-in, because of his popularity. He did serve several terms as registrar of voters. Charlie served for many years as a valued vestryman at St. Stephen’s Church.
In his younger days, Charlie, who was a great lover of sports, was a very good left-handed pitcher. He used to umpire the baseball games and he was exceptionally good at settling disputes. His word was always taken as the players had a lot of respect for him.
He also used to keep score at the Congregational Church Bowling Alleys for the big pin bowling league. We well remember one occasion when a violent dispute erupted between two very angry, very big and very tough bowlers.
As they were about to tear each other apart, Charlie jumped from behind the bench on which he was keeping score. He threw his cap on the floor and jumped between the huge gladiators and announced that if there was going to be any fighting, he would do it. No doubt he saved someone from serious injury, as the sight of this great little man serving as a buffer between the big fellows, caused everyone to laugh. All agreed that his quick action had quelled a potentially dangerous situation.
Charlie developed several nice hobbies during his long life span. He had a real fine stamp collection but his greatest collection was of autographs and especially those of Presidents of the United States. He had them all, with the exception of George Washington. He also had the autographs of Civil War Generals, missing only J.E.B. Stuart and Stonewall Jackson.
The Ashbees sold their home on Wilton Road West in 1946 to Elmer Q. Oliphant. In case you never heard of Ollie. he was the greatest athlete ever to graduate from West Point. He was on everyone’s All-Time All American Football Team.
Charles Francis Ashbee received many tributes and he deserved every one. He was the first to receive the Citizen of the Year Award from the Ridgefield Rotary Club.
One year after his passing in 1962, the road Ashbee Lane, off Route 7 was named in his memory.
Uncle Charlie continued his role of the man in the red suit, at this time of year, until his 88th birthday. At that time he was a patient at Altnacraig on High Ridge and felt bad that he could not go out to visit his kids. So the procedures were reversed and his kids all came to see him. It was a great tribute to a great man.

(NOTE: Dick Venus, who became Ridgefield’s first town historian, wrote 365 “Dick’s Dispatch” columns for the Ridgefield Press, telling about life in Ridgefield during the first half of the 20th Century. This column appeared Dec. 23, 1985.)