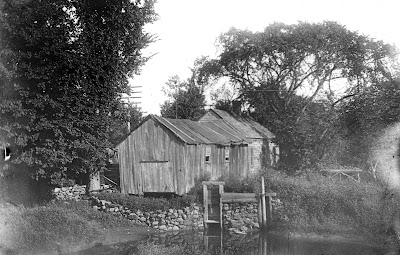 The Ebb and Flow of the Pond
When I first saw this Joseph Hartmann photograph many years ago, I figured it showed a mill somewhere in Ridgefield. It looked as if there was a sluice to power the mill built into that dam.
Only problem was: Where was the wheel the water would turn?
Then my boss, Karl S. Nash, publisher of the Ridgefield Press, explained what was probably shown here, a scene almost impossible to find today.
The stone-and-earth dam has an adjustable spillway, made of wood. Many farmers would use such an arrangement to keep their brook-fed ponds high in the winter so they could cut and store (or sell) ice, and low in the summer so the bog grass could grow, later to be cut as bedding for livestock.
This small barn or shed, and house to its rear, might be along some major highway in town, possibly North Salem Road. Karl believed that utility pole, visible just to the left of the barn’s peak, was part of an interstate telephone trunk line, connecting such cities as Boston and New York. It ran through town even before telephone service was available locally to many outlying sections of Ridgefield. It was the 1900 version of the underground interstate cable and gas lines that run through town now.
Unfortunately, neither Karl nor our readers back in 1982, when this photo was published in The Press, were able to identify the buildings shown here. Judging from their condition, they probably didn’t last too many years after the picture was taken by Joseph Hartmann.