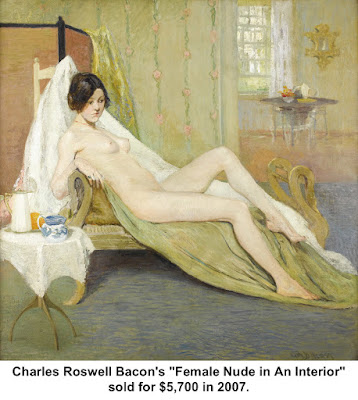 Charles Roswell Bacon:
An Unappreciated Artist
Among the thousands of gravestones in the Ridgefield Cemetery off North Salem Road is one lying on the ground. It’s hard to tell whether the stone was once upright and fell over, or was placed flat when it was new. But slowly the surrounding sod has been covering the face so that it is becoming harder and harder to read.
The disappearing gravestone is perhaps symbolic of the life and death of Charles   Roswell Bacon, a promising American artist and father of noted American author and illustrator Peggy Bacon. The son of a man who drank himself to death, Bacon lost two sons in infancy, struggled with poverty as he sought success as a painter and, depressed over the lack of recognition for his work, killed himself. 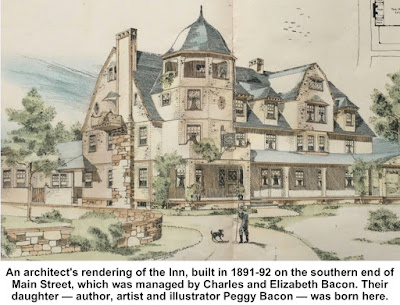 Born in New York City in 1867 to a middle-class family, Charles Roswell Bacon knew hard times from a very young age. His father, after the failure of his business as a marble importer, drank
himself to death when Charles was only six years old, and Bacon left public school at the age of 10 to help support his family. However, he showed an early talent for painting, and was able to study at the Art Students’ League in Manhattan. There he met his future wife, Elizabeth Chase, a miniaturist who came from Kentucky.

The artistic pair studied for a year in Paris, including spending time with Claude Monet at Giverny. They returned to the United States and wound up in Ridgefield where they were married  in 1892 and, to support themselves, took jobs managing a new resort hotel here.
The Inn, built in 1891-92 on the eastern side of southern Main Street,  operated only during 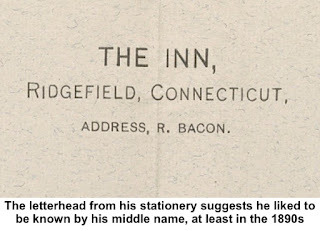 the warmer months, giving both Bacons a chance to paint and travel in the off-season. They continued to operate the hotel into the early 1900s.

Their daughter, Margaret Frances “Peggy” Bacon, was born there in 1895. Two sons born later died in infancy, and are buried in Ridgefield Cemetery.
The three Bacons became a tight-knit family, one that Peggy Bacon remembered with fondness.
“I had the most charming and amusing parents,” she said in a 1973 interview. “We led a very close life together. There was a great deal of reading aloud. They were both very well read.”
“Mother and Father were never affluent. That’s putting it mildly,” Peggy told a Smithsonian Institution interviewer. “As I recall, all my life we had an extraordinary amount of amenities and delicacies even, and delights considering that they were poverty-stricken. The food was marvelous, very gourmet food. And there were quantities of books, endless books arriving. And a great deal of charm.
“They were people of taste. Father was very well-read in French. He spoke French so well 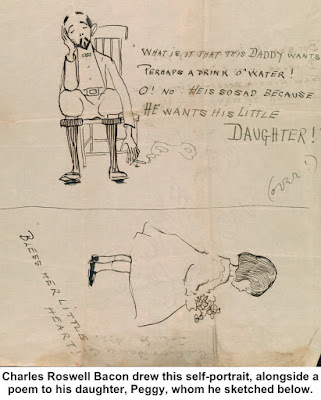 that French people mistook him for a Frenchman. And yet he had no schooling from the age of ten.”

When the Inn was closed off-season, “We spent certain winters in New York when I was a child,” Peggy Bacon said. “He took me around to galleries. Then we lived in France for a couple of years, at Montreaux-sur-Mer in Picardy. It was absolutely delightful….It was a lovely life, really. Well, Father was very gregarious.”
Peggy herself was largely home-schooled as a child. Because they were always struggling to earn enough money to live on, the Bacons were unable to send Peggy to the equivalent of high school. Seeing this, two family friends in Ridgefield paid to send Peggy to a boarding school, Kent Place School in Summit, N.J.
Perhaps it was at this time that Charles composed the poem and drew the self-portrait and sketch of Peggy that is now in the Smithsonian Institution’s collection. He wrote:
“What is it that this Daddy wants?
“Perhaps a drink o’water!
“O! No. He is so sad because
“He wants his Little Daughter.”
At the turn of the 20th Century, Charles Bacon was gaining some notoriety. He had exhibitions at the Fulton Gallery and at the Milch Gallery in New York. His works were also in the famous Armory Show in Manhattan in the early 1910s. 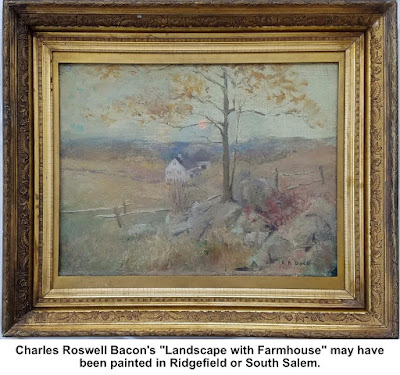 However, by 1913 when he and Elizabeth had a home in South Salem and he had a studio   in Manhattan, he was becoming increasingly depressed. And on Friday, Oct. 10, he went to his studio, apparently finished a landscape he had been painting, wrote a two-sentence will, and turned on the gas jets in the room. He was found dead by a janitor the next day.
The New York Times had never covered Bacon’s work until he died. Like a yellow tabloid, it then did the 725-word story about the discovery of his body, under the headline, “Find Artist Dead A Suicide by Gas.” 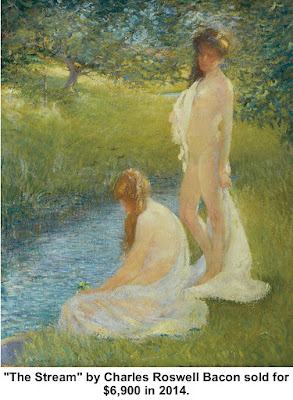 The story reported police finding a note, composed to be his will. “I leave to my beloved wife everything of which I die possessed — pictures, frames, clothes, everything. Intending this night to commit suicide, I cannot have this witnessed, but it should carry conviction with it.”
While his wife and daughter were shocked at the suicide, there had been signs that the artist was troubled. 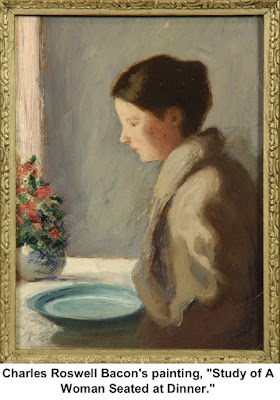 “Mr. Bacon had been despondent for some time over the lack of recognition of his work by the public and critics,” The Times reported his brother-in-law, J.W. Colt, as saying.
Three months later, the newspaper carried a brief story about the sale of his studio full of paintings at the Anderson Galleries. The entire collection brought $4,255 — more than $100,000 in today’s dollars, with the biggest sale being $435 ($10,800 in 2018).
Today, a fact that might surprise the painter, Bacon’s works sell for as much as $7,000 at at auctions. Some, however, fetch only a few hundred dollars.
Elizabeth continued to live in the 18th Century farmhouse at the corner of Spring Street and Boutonville Road in South Salem, and by the 1930s was operating an antiques business. A barn on her property was used as an office by both the local visiting nurses and as the performance venue for an active South Salem theater group. However, in the 1950s the barn was purchased and moved to Route 35 where it became the dining room — and probably the namesake — of the popular restaurant called The Hayloft.
Bacon was not only a painter, but a poet, whose work appeared in magazines and newspapers at the turn of the 20th Century. Probably his best-known poem was published in The Century magazine in 1901 and was reprinted in newspapers across the country. It was a somewhat dark work that ended, unlike his life, on a note of hope:

UNDER THE SUN
The men who have gone before us
Have sung the songs we sing;
The words of our clamorous chorus,
They were heard of the ancient king.

The chords of the lyre that thrill us,
They were struck in the years gone by,
And the arrows of death that kill us
Are found where our fathers lie.

The vanity sung of the Preacher
Is vanity still to-day;
The moan of the stricken creature
Has rung in the woods alway.

But the songs are worth resinging,
With the change of no single note.
And the spoken words are ringing
As they rang in the years remote.

There is no new road to follow, Love!
Nor need there ever be,
For the old, with its hill and hollow, Love,
is enough for you and me.