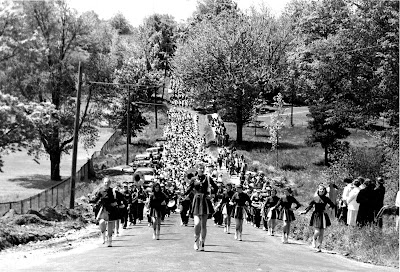 Youth On Parade
Several pictures of the Children’s Parade during Ridgefield’s 250th anniversary celebration  have been posted on Facebook’s “Old Ridgefield” group, but none quite as impressive as this one.
The scene is Governor Street looking west from East Ridge on Friday, May 23, 1958. Led by the high school cheerleaders, the parade of the town’s public and Catholic school children had marched down Main Street and was now nearing its end as it approached  the athletic field behind the old Ridgefield High School.
The town had about 1,500 school children back then and it’s fair to say most of them marched in this parade. (Today about 4,765 are enrolled, which would make for a much longer parade!)
At the ballfield, thousands gathered for performances staged by students of various grades and schools.
An interesting aspect of this picture is the field to the right. Just a few weeks after this picture was taken, ground was broken for the new Ridgefield Boys’ Club on that property. In May 1958, the club was still in the old Loder House, on the same north side of Governor Street but west of this scene, about where the Fairfield County Bank drive-in is (the trees are hiding it from the camera).
The lawn and walk visible beyond the future club site at the right led to the Victorian house that soon became the Donnelly office building for a half century. It was torn down four years ago for the new Ridgefield Visiting Nurse Association headquarters. (For more on this, search this blog for “House of Friends.”)
Up the hill behind the trees on the same side would, in another year and a half, appear the Donnelly Shopping Center, with its First National supermarket and Woolworth’s.
The left or south side of Governor Street looks pretty much the same today, except it’s irrigated baseball and soccer fields instead of just lawn.
One last interesting feature of this picture is the cheerleaders. If you look closely, most of them, along with some band members, appear to be looking at something happening behind the lead cheerleader in the middle. And they are smiling about it. Why?
The picture was taken by Bramac Studio, according to the back. While no photographer’s name is given, Bramac was owned by James Kavallines,  and was the contract photographer for The Norwalk Hour; that is to say, The Hour did not have staff photographers and used Bramac for photo assignments for many years.