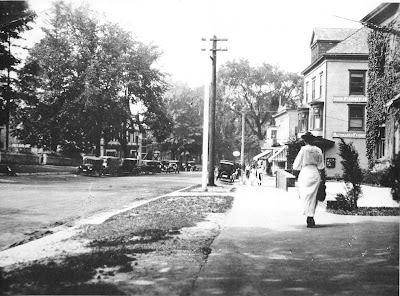 Strolling Along Main
Early 20th Century photographers of the village seemed fascinated with the section of Main Street that includes the Bedient building. At least a half dozen shots of the Main and Bailey corner a century or more ago have been posted here.
This view, probably shot with an inexpensive camera like one of those new-fangled Kodak Brownies, provides a little bit different angle. It’s taken on the sidewalk in front of the Masonic Building (where Coldwell Banker has its real estate office now, but the Ridgefield Press had the spot then.)
Odds are the woman whose back is to the camera was connected with the photographer, whose identity is unknown (Joseph Hartmann’s photos, taken with a high-end camera, were much sharper).
We’re guessing the picture is from the late 1910s, but an antique car buff with a good eye might be able to give us a closer date from the various cars parked along the street. Or an expert on fashions might be able to estimate a date from the dress worn by the woman.
The shot definitely is after 1914, about when the Tudor-styled Telephone Building in the distance, left, was erected. (It later became the home of Roma Pizzeria and other well-known businesses.) And it’s before 1925 when Main Street was paved.
Those striped awnings, probably red and white, were very popular on both houses and stores back around 1920 or so.
At the extreme left, you can see the picket fence that surrounded the Methodist Church compound.
Notice that the front of the town hall, right, was covered in ivy. That remained the case for many years, but the greenery was removed in the late 1960s or early 1970s after it was determined that the plants were harming the bricks.
Speaking of which, just this fall, the brick wall in front of the woman was completely replaced as part of a restoration of the town hall “plaza.” It looks just the same now as then, but is apparently less likely to fall over on a passerby.