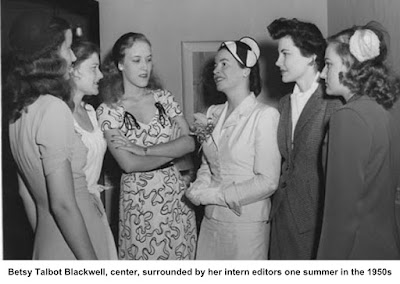 “Her attention to the college and young career women was so successful that other fashion magazines, like Vogue, Glamour and Harper's Bazaar, began to imitate Mademoiselle’s youthful format,”  The New York Times once reported.
Blackwell considered Mademoiselle a magazine of  “good taste at a moderate price” rather than a “deluxe luxury magazine with emphasis on Paris fashion,” she told The Times
Betsy Talbot was born in Verona, N.Y., in 1905, the daughter of a fashion-expert mother and a writer father. Her mother, Benedict Talbot, was a well-known fashion stylist for such retailers as Macy, Gimbel, Saks, and Lord and Taylor. Late in life, she lived at The Elms Inn on Main Street where she died in 1974.
Betsy Talbot was educated at a convent school. When still a teenager  she began writing about fashion in 1923 and soon was assistant fashion editor at Charm magazine.
In 1935, she joined Mademoiselle, then brand new. Under several noms de plume she was editor of four sections, including fashion. Two years later, she was named editor in chief.
She brought innovation to her magazine. For instance, “she took plain young women to New York, where she put them in stylish clothes, restyled their hair and makeup and then put their pictures in her magazine,” said the Los Angeles Times. “The idea that an ordinary girl could be turned into a fashion model soon made Mademoiselle must reading for young women across the land.”
She also introduced fine writing, publishing the works of such authors as Truman Capote, Flannery O’Connor, William Faulkner, Joyce Carol Oates, Dylan Thomas, and Eudora Welty. She was among the first to publish Gloria Steinem and other leaders of “women’s liberation.”
In aiming her magazine at college students and graduates, she created the “college issue,” in which she would bring in a group of college-age “editors” each summer to create the September issue. Among the many interns who worked on these issues was the poet Sylvia Plath, whose novel, “The Bell Jar,” was modeled after her experiences under Blackwell.
Another summer editor was Joan Gage, a longtime journalist who wrote on the Huffington Post: “She was one of the last of what I call the Pleistocene Era of magazine editors — a group of eminent women who, early in the 20th century, ruled their kingdoms with the proverbial iron hand in a velvet glove...They dictated to the women of America what to wear and cook and how to behave, and the women of America took their word as gospel.”
Under Blackwell’s leadership, Mademoiselle’s circulation rose from 178,000 in 1939 to 540,000 in 1953.
During her career she had many accomplishments and earned many awards. She was a Woman of the Year for the American Women’s Association, and was profiled in the 1984 book, “Wise Women: Singular Lives That Helped Shape Our Country.” She was the first and only woman on the board of directors of Street and Smith, the magazine publishing company, and was once the only woman director of the Hanes Corporation. She was also a director of the Columbia University School of General Studies.
She was married to James Madison Blackwell III, a Wall Street lawyer, who died in 1961. Ten years later, she moved to West Lane to be closer to her son, James M. Blackwell IV, then a Newsweek executive and Ridgefield school board member.
She died in 1985 at the age of 79.