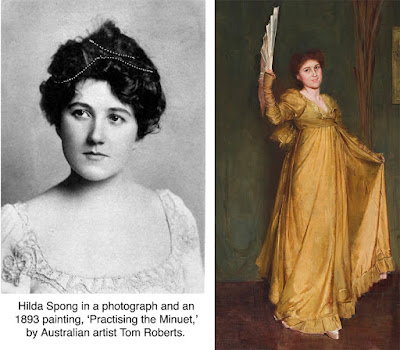 Hilda Spong:
A Star of the Stage
Famous in her era as a talented and glamorous actress, Hilda Spong quietly lived her final years in Ridgefield. At the end, she was, alas, the subject of one of the most embarrassing typographical errors ever to appear in The Ridgefield Press.
The stage was in Hilda Spong’s blood. Born in 1875 in London, England, Spong was the daughter of Walter Brookes Spong, a landscape artist who was also well known as a stage scene painter for theaters in England and later Australia, where he moved with his family in 1886.
Her long career began in Australia in 1890, when she was 15, and she soon moved to London. She was on the New York stage by 1898. Over the next 40 years, she performed professionally in more than 50 major productions on three continents, but mostly on Broadway. She specialized in comedy, but was equally adept at tragedies and melodramas. She was also in a couple of silent movies, and one 1933 “talkie.”
Spong was noted for being a “beauty,” a term she is said to have disliked. Nonetheless, The San Francisco Call said in 1901, reporting that she was about to appear on the stage there for the first time, “You never knew a beauty who didn’t want to impress you with the idea that she was all brain, just as the clever women long to be deemed beauties — New York has said that Miss Spong is plenty of both.”
A painting of Spong by noted Australian artist Tom Roberts is in Australia’s National Portrait Gallery in Canberra, where a video describing it is titled “Who the devil was Hilda Spong?” Suggesting she was the Cate Blanchett or Nicole Kidman of her day, the narrator says “she had the fame, the fans, the glowing reviews, the scandals, and the love affairs.”
Spong was also painted by America’s acclaimed artist William Merritt Chase; that life-size, full-length portrait belongs to the Virginia Museum of Art in Richmond.
Around 1935, Miss Spong moved to 19 Main Street, a house she called Maplewood; it’s on the west side of the street just north of Wilton Road West.  She retired from the stage a few years later.
“She was a versatile artist whose arduous training had included everything from Shakespearean tragedy to inconsequential comedy,” The Ridgefield Press said in her 1955 obituary. “Because she was professional in her attitude toward acting, she continued to study singing and rarely spent a day without reading Shakespeare.”
In an unfortunate typo, that front-page obituary was headlined, “Hilda Spong, Stag Star, Dies at 81.”
at September 17, 2016