Samuel G. Goodrich:
The Extraordinary Peter Parley
Samuel G. Goodrich was an extraordinary fellow on several fronts. The man who was known to millions in the 19th century as “Peter Parley” provided the nation with a new kind of textbook for its schools, helped introduce the world to one of America’s greatest early authors, and gave Ridgefield a remarkable account of life in the town more than 200 years ago. 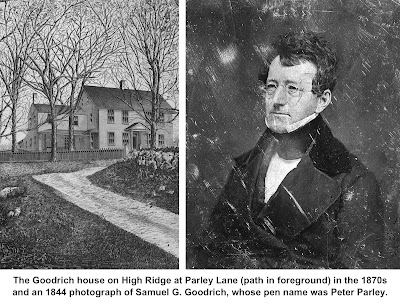 Samuel Griswold Goodrich was born in 1793 in a house, no longer standing, near the corner of West and Golf Lanes. His father, the Rev. S. G. Goodrich, had moved there in 1789 to become the third minister of the First Congregational Church.
When young Samuel was four, his father had a new home built on four acres on High Ridge; the house still stands today at the head of Parley Lane. Samuel spent his childhood there, and left in 1808 to work in a Danbury store and then in Hartford, eventually winding up in the publishing business in Boston.
Literally millions of his Peter Parley books—chiefly histories, biographies and geographies—were sold in the 1800s. Some scholars consider Goodrich to be the father of the modern textbook because he made his schoolbooks interesting to children, both in the way they were written and in the way they were illustrated.
His brother, Charles A. Goodrich, was also an author whose histories were widely used in 19th century schools.
Charles was a Yale graduate; Samuel never went to college, and when asked where he was schooled,  “My reply has always been, ‘at West Lane,’” he wrote, referring to the one-room Ridgefield schoolhouse he had attended as a boy. “Generally speaking, this has ended the inquiry, whether because my interlocutors have confounded this venerable institution with ‘Lane Seminary,’ or have not thought it worthwhile to risk an exposure of their ignorance as to the college in which I was educated, I am unable to say.”
Those words appeared in his 1,100-page “Recollections of A Lifetime,” published four years before his death in 1860. This autobiography offers more than 200 pages on what it was like growing up in Ridgefield at the turn of the 19th century and is a unique look at the life and characters in the town then. Few communities in this country are fortunate enough to have as extensive, as literate and as intimate a report on daily life two centuries ago.
Goodrich lived many of his adult years in the Jamaica Plain section of Roxbury, now part of the city of Boston, buying 45 acres of “wilderness” there in 1837. Interested not only in literature and publishing, he was also involved in political life, and served as both a state representative and a state senator from Roxbury in the Massachusetts legislature. (Today, there is a Peter Parley Road in the Jamaica Plain district of Boston, recalling Goodrich’s estate there.)
Pulitzer Prize-winning historian Allan Nevins called Goodrich “Ridgefield’s greatest literary son.” Nevins said Goodrich’s “greatest service to pure literature” was not his books, but his illustrated annual, “The Token,” which he edited from 1828 until 1842. “The Token” published the works of rising authors, including Henry Wadsworth Longfellow, Nathaniel Hawthorne, Edward Everett, John Adams, and Horace Greeley as well as Goodrich himself.
Hawthorne called “The Token” “a sort of hothouse, where native flowers were made to bloom like exotics.” 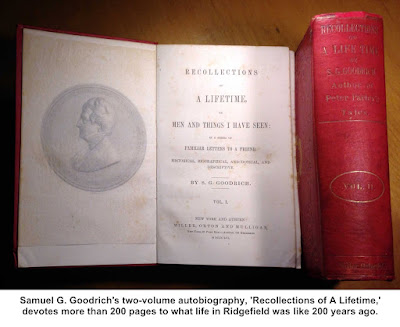 During this period, these annuals became so popular, they were widely pirated, and Goodrich became what Nevins called “a figure of importance in the literary world.” Hawthorne, no doubt with tongue in cheek, called Goodrich “a gentleman of many excellent qualities, although a publisher.”
Nevins maintained that “Hawthorne … owed Goodrich a heavy debt, which he frankly acknowledged, for encouragement while he was still totally unknown. Goodrich saw the romancer’s first sketches when they were published anonymously, and inquired concerning their authorship, thus bringing about a correspondence.”
In those letters, Goodrich found Hawthorne depressed because his early works were not being published or appreciated. “I combated his despondency, and assured him of triumph, if he would persevere in a literary career,” Goodrich wrote in “Recollections.”
Goodrich not only published, but also promoted Hawthorne, writing essays for newspapers that praised his writing and networking on Hawthorne’s behalf in the publishing world. “In 1837, he urged Hawthorne to publish a volume, and helped him find a firm to issue ‘Twice-Told Tales,’ ” Nevins said.
“Twice-Told Tales” wound up getting fine reviews, including one from Edgar Allen Poe, who wrote: “The style of Hawthorne is purity itself. His tone is singularly effective—wild, plaintive, thoughtful, and in full accordance with his themes…We look upon him as one of the few men of indisputable genius to whom our country has as yet given birth.” The Grolier Club, the nation’s oldest society for book-lovers, named “Twice-Told Tales” the most influential book of 1837.
Hawthorne went on to become famous for such novels as “The Scarlet Letter” and “The House of the Seven Gables” while Goodrich, by his own accounting, published more than 170 books under the name of Peter Parley, many making use of other writers. His last effort, which appeared in 1859, was a 1,400-page, two-volume tome, “The Animal Kingdom Illustrated,” also later called Johnson’s Natural History.
Late in life, Goodrich was named U.S. consul in Paris and although millions copies of his books were already in print, he took that opportunity to get some of his titles published in French. He may have been a great literary man but he was also a savvy businessman.
at September 16, 2016