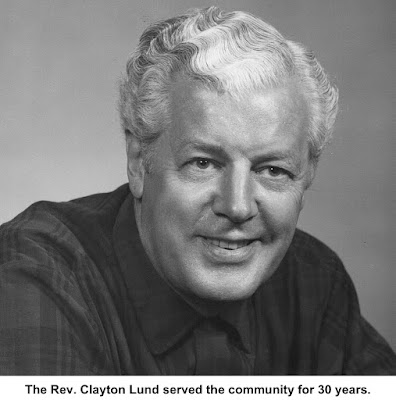 Clayton R. Lund:
Uncontainable Compassion
Only two pastors in the three-century history of Ridgefield’s oldest church have served longer than the Rev. Clayton R. Lund. One was his predecessor, the Rev. Hugh Shields, and the other was the Rev. Jonathan Ingersoll, from 1740 to 1778.
The 17th minister of the First Congregational Church arrived in 1956 and retired just 30 years later. During Lund’s first 10 years here, the congregation tripled in size to 800 people, a church school was added, and an assistant minister was hired.
A native of Providence, R.I., Clayton Reginald Lund was born in 1919 and graduated from Clark University and Andover-Newton Theological School.  He served congregations in Massachusetts and New York before coming to Ridgefield at the age of 37.
“A ministry is a life of service to other people,” Mr. Lund said in 1986 when he was retiring after 42 years of parish work. “My daily agenda is created by the needs of others. A minister has to be a teacher, preacher, pastor, administrator, and community leader.”
Lund was all of those, often participating in community organizations and speaking up for people in need.
He was also a strong leader. In 1978, just after extensive renovations were completed, a child playing with a candle ignited a fire that destroyed the Church House. Lund led the efforts to build a new church house, which was completed in 1980 and named Lund Hall in his honor.
However, over his three decades in Ridgefield,  Lund was best known for comforting those in need. At his retirement, novelist and historian Kathryn Morgan Ryan, whose Roman Catholic husband, author Cornelius Ryan, was a close friend of the minister, called  Lund “a man of surging talent and uncontainable compassion. Very soon now…we in the town he loves will realize that, like others in our lives, we took him for granted, that we believed he would always be here for us — all of us, any of us, at any time. It is hard to let go of the security he represents.”
He was so respected as a minister that in 1990, Andover-Newton, his alma mater, established a $20,000 Clayton R. Lund scholarship for ministerial students.
Lund, who had moved to Danbury after his retirement, died there in 2000 at the age of 81.
“Clayton Lund brought a powerful blend of dignity, faith, wisdom, flair, and charm into the pulpit,” wrote the Rev. Dr. Charles Hambrick-Stowe in his 2011 church history, “We Gather Together.” “He was well-suited for leading the church through the rapid changes coming to the town of Ridgefield from the 1950s through the 1980s.”
Lund himself described those changes concisely in a 1987 church history, “Ridgefield … was on its way to becoming one of the East’s most desirable and expensive places to live. Ridgefielders watched with some apprehension as their beautiful town, in which they knew and greeted one another, was ‘invaded’ by newcomers. Change was rapid, construction was everywhere. Woods were cut down for new development; oddly named new roads ribboned the hills and valleys; personal service and shopping became a thing of the past.”
at September 25, 2016