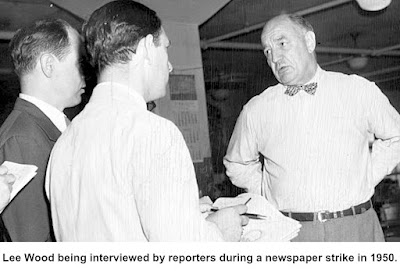 Lee B. Wood:
Rockefellers’ Dimes
When Lee B. Wood was a student at Amherst College, Talcott Williams, head of the Columbia School of Journalism, told him he’d never make it as a newspaperman.
Williams may have been a good journalist, but he was a poor judge of talent; Lee Wood went on to become an editor of a New York City daily newspaper when he was only 33 years old, and led a team that collected four Pulitzer Prizes during his tenure.
Born in 1893 in Pennsylvania, Wood got his first job in 1916 was as a reporter for a newspaper in Cleveland where he made a point of attending the same Baptist church as John D. Rockefeller Sr.  Each Sunday, he’d approach Rockefeller and ask for a comment on current news and each time, he’d get an answer and a dime. Some of those answers turned into big stories and the dimes — worth about $2 in today’s money — helped the $12-a-week reporter to eat.
Years later, sitting next to Nelson Rockefeller at a dinner, he described his experiences with the vice president’s grandfather.
“Did you save your dimes?” Nelson Rockefeller asked.
He hadn’t.
“Well, I saved mine and if you like, I’ll send you one.”
Rockefeller did and Wood saved it.
Lee Wood spent 64 years in journalism, working in Cleveland, Paris, and Oklahoma City before coming to New York in 1927 as an editor at The New York Telegram, a Scripps-Howard newspaper. He eventually became both editor and president of The New York World-Telegram and Sun, which won four Pulitzer Prizes while he was an executive.
He retired in 1965 to become president of the Scripps-Howard Investment Company, which owned newspapers, and the Scripps-Howard Foundation, which awards journalism scholarships.
Wood and his wife Mildred came to Ridgefield in 1934, buying a Ridgebury farm. When they were older, they moved to a smaller house nearby.
In 1979 the Woods moved to Ohio and he died there two years later at the age of 88.
Before he left town,  Wood gave more than 1,000 books to the Mark Twain Library in Redding, founded by Twain himself, for its famous annual summer book sale.


“Mark Twain was quite a newspaperman,” Wood said at the time. “And it seems quite fitting to give a newspaperman’s library to a library named after him.”