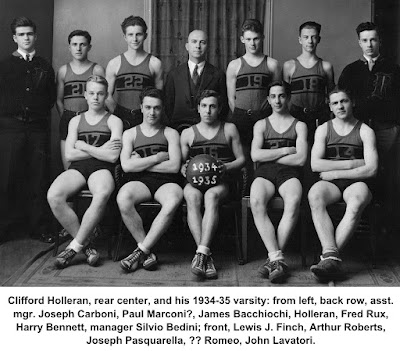 Clifford A. Holleran:
Beloved Principal
For 36 years,  Kip Holleran was principal of Ridgefield High School and over all that time, he could knew each and every student by name.
“Whenever a graduate would return to the halls of his secondary school learning, he or she would first stop at Mr. Holleran’s office, not because he had to, but  because he wanted to,” The Ridgefield Press said in an editorial about the principal.
Born in 1895,  Clifford Ambrose Holleran grew up in Watertown, Conn., and graduated from Bucknell in 1920. A year later, he was hired as both a principal and a teacher at Hamilton High School, the original Ridgefield High School, then located on Bailey Avenue.
The late Dick Venus, town historian, told this story of Holleran’s first day in a classroom in Ridgefield:
“He wanted the names of each of his pupils. He asked that each one arise and give his or her last name as they were called on.
“My brother Joe sat in one of the front seats and when Mr. Holleran pointed to him, Joe dutifully arose and said his name was Venus. The new principal blinked at the rather unusual name and then called on the next student, who declared his name was Romeo (probably Fred Romeo).
“With that, Mr. Holleran called a halt to the proceedings as he had a feeling that he was being taken advantage of. In a loud voice, he said, ‘Some of you think you are pretty smart but if the next one who gets up tells me his name is Juliet, there will be trouble.’
“When the two boys were able to prove that their names were actually Venus and Romeo, Mr. Holleran had a big laugh over it.” 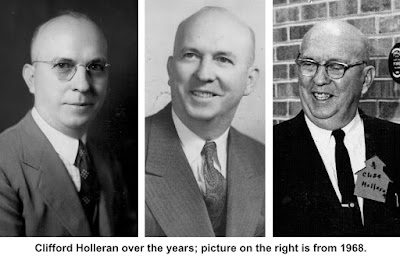 In his early years, he spent more time teaching than principaling — he taught geometry, trigonometry, science, chemistry, physics, and mechanical drawing.
When he arrived at the school, there were no organized athletic teams, and he created baseball and basketball squads. For 20 years, he coached both, transporting them to out-of-town games, running magazine drives to pay for them, and sometimes winning championships.
Occasionally he’d even referee the games — because of his reputation for fairness, opposing teams didn't mind.
After World War II, when the school grew large enough to hire an athletic director to take over, football was finally added and Holleran became a full-time principal — and twice was acting superintendent of schools.
“Mr. Holleran [was] a very kindly man,”  Elsa Hartmann, longtime teacher of history and German at RHS, recalled in 1983. “Even so, he was a strict disciplinarian and woe betide any student who got out of line.
“On one occasion he heard a noise in the hallway and opened the door to see what was going on. Jim Sullivan had been sent to a window at the rear of the hall to clap the chalk dust out of some blackboard erasers. Lawrence Brundage opened a door at the other  end of the hallway and Jim promptly threw an eraser at him. Of course, the eraser was returned with gusto and soon the air was flying erasers.
“As the door between the two combatants opened, a balding head appeared and caught the full force of an airborne eraser. When Jim saw what he had done, he clambered out the window and ran as fast as his legs could carry him.”
Holleran retired in 1957, but like many educators of the first half of the 20th Century, he lived here, was active in the non-school community, and remained so in retirement.
He was a founder and the first president of the Rotary Club, served on the Ration Board during the war, and was a director of the Boys Club for 14 years. He loved golf, and his favorite partner was Tabby Carboni.
In 1947, he married his longtime sweetheart, Grace C. White, after her retirement following 44 years of teaching here. She died in 1963 at the age of 79, he in 1971, age 78.