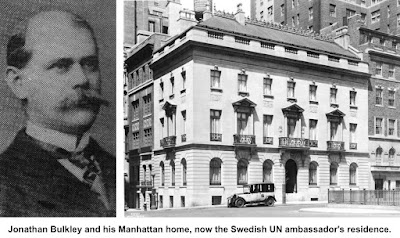 The Bulkleys:
The Home on the Hill
In 1902, Jonathan and Sarah Tod Bulkley established one of Ridgefield’s many grand estates. More than a century later, Rippowam is the only remaining estate that is virtually unchanged in acreage and in use from that “Golden Era” when many New Yorkers built their country homes here.
What’s even more amazing, Rippowam is still owned and occupied by the same family.
Descended from the founders of Fairfield, Jonathan Bulkley was born in 1857, graduated from Yale in 1879 and joined the paper manufacturing firm of Bulkley, Dunton and Company, which his father had established in 1833. The company still exists; it calls itself  the largest paper company in North America providing paper products to magazine, book, and catalog publishers. It’s also one of the oldest continuously operating businesses in New York State.
Bulkley was also a director of various other companies, a member of New York social clubs and an influential man in the life of the city.
The home he and Sarah built at 600 Park Avenue in 1911 is considered one of the city’s architectural treasures. The mansion was designed by James Gamble Rogers, whose many major projects included Sterling Memorial Library and a dozen other buildings at Yale and more at other universities, including Northwestern, Columbia and NYU; the Federal Courthouse in New Haven; Presbyterian Hospital in New York; Butler Library at Columbia; and Memorial Sloan-Kettering Hospital in New York.
The Bulkley home was the scene of one of New York’s costlier burglaries. According to an account by New York City building historian Tom Miller: “On Feb. 22, 1927, Sarah Bulkley left the house at 3 to attend a tea. Around her neck hung a pearl necklace valued at $50,000 and her fingers were weighed down with several expensive rings. It was a fortunate choice of accessories for Mrs. Bulkley.
“When she returned at 6:30 she found her safe opened and empty. Gone was all of Sarah’s jewelry – diamond bracelets, diamond and emerald rings and a lorgnette chain with 97 diamonds valued at $20,000. ($20,000 then was equivalent to $275,000 in today’s dollars.)
“Bulkley and his sons, who were 29 and 27 years old at the time, had been home all afternoon; none of the servants knew the combination to the safe other than Sarah’s personal maid, Ida Kaemfer; and police called it an ‘inside job.’ All circumstantial evidence pointed to Ida.
“Mrs. Bulkley, however, insisted that the maid was ‘above suspicion.’  The case was never solved.”
Both Jonathan and Sarah were involved in many in philanthropic and social endeavors. He was president of the East Side House Settlement, one of New York’s oldest organizations helping the poor (it still exists today in the South Bronx). Sarah was vice president of the New York Y.W.C.A and active in the the Girls Service League in New York.
Sarah was also president of the Garden Club of America from 1932 to 1935 and traveled widely in the United States and in Asia promoting the aims of the club. At one point in the 1930s, Japanese Prince Fumimaro Konoye came to Ridgefield to visit Mrs. Bulkley at Rippowam. When she later went to Japan on behalf of the garden club, the prince entertained her. (Konoye went on to become prime minister of Japan, but resigned shortly before Pearl Harbor. In 1945, he was closely involved in efforts to stop the war.)
Sarah Bulkley, who summered in Ridgefield for 40 years, was a charter member of the Ridgefield Garden Club, serving as its president in the 1920s. Along with her daughter, Sarah Bulkley Randolph (1897-1982), she was one of the founders of the Ridgefield Boys Club.
Rippowam, which is situated on Rippowam Road near the top of West Mountain, overlooks Lake Rippowam in Lewisboro and includes land in that town. The cave of Sarah Bishop, the legendary post-Revolutionary-era hermitess, lies within the estate’s bounds.
The Ridgefield Press noted in 1939 that Rippowam was well-known for its “swinging bridge” which Sarah designed around 1920. The bridge extended from the edge of a 60-foot-deep wooded ravine some 50 feet out to the top of a large oak tree to which it was fastened and from which it swung from side to side a few inches from its anchorage. The bridge eventually deteriorated and was removed.
The family allowed kids from the Boys Club to use a pond on the property many years ago.
Jonathan Bulkley died in Ridgefield in 1939 at the age of 82. Sarah Bulkley, a native of Cleveland who grew up in Brooklyn, died in 1943 at the age of 72.
While the family still owns the Ridgefield home, it sold the Manhattan residence three years after Sarah’s death to the Royal Swedish Government. Today it is the residence of the Swedish ambassador to the United Nations.
at September 27, 2016