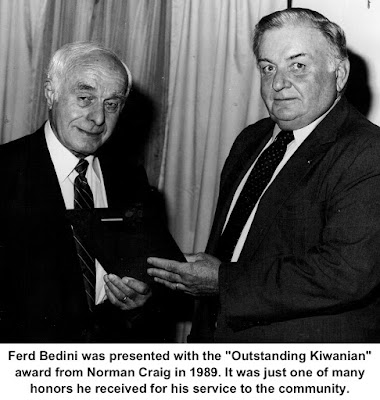 Ferdinand Bedini:
A Silent Servant
There are community volunteers who are often in the news and there are others who work quietly behind the scenes, eschewing publicity. Among the busiest civic-minded Ridgefielders in last half of the 20th Century was Ferdinand Bedini, a volunteer extraordinaire. If, for instance, you had given blood any time from 1960 onward, chances were that Bedini was at the Bloodmobile with you, either running it or helping out — and being a high donor as well!
He put in countless hours for the community through the Kiwanis Club, which honored him with at least three service awards. He served his church, St. Mary’s, through the Knights of Columbus for more than 60 years. In 2000, the Knights honored him as “Knight of the Century.”
Born in Italy in 1913, Ferdinand B. Bedini was brought over to Ridgefield when he was three months old, grew up on North Salem Road, graduated from Ridgefield High School in 1931, and from Connecticut State Trade School four years later. He went to work for his father Vincent's contracting firm, taking over the business in 1947. 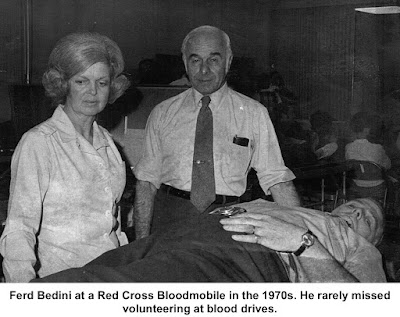 During World War II,  Ferd Bedini headed an Army Air Force crew that maintained and serviced the gunsights on B-17 and B-24 bombers.
Over the years he was a member of the 4-H Garden Club, the Ridgefield Boys Band, boating groups at Lake Candlewood, the board of the Community Center, American Legion, Ridgefield Men's Club, Italian-American Club, Boy Scouts, and the Retired Senior Volunteer Program (RSVP). He also served on the Board of Advisors of the Connecticut National Bank’s Ridgefield branch for 22 years.
In the 1990s, he became one of the area's busiest chair caners, and he estimated he'd done more than 3,000 chairs since between 1993 and 2000 alone.
He and his wife, the former Angela Antonetti, marked their 50th wedding anniversary in 1996. Mrs. Bedini died a year later.
Also in 1996, the Ridgefield Old Timers Association gave him its annual Civic Award.
That same year, he was named grand marshal of the Memorial Day Parade. Said parade organizer Rene Franks, “He’s been a guy looked up to for what he's done not only for his country, but also for the town.”
He died in 2002 at the age of 89.
“He was always someone to look up to,” said his younger brother, Smithsonian historian Silvio Bedini. “He was also the most honest man I’ve ever known — I’ve never known him to tell a lie.”