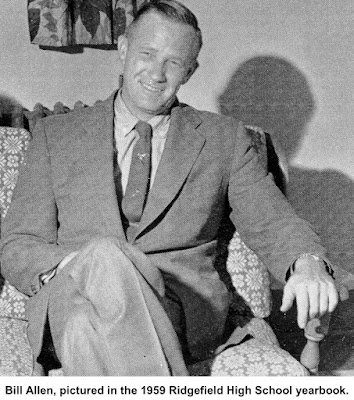 William W. Allen:
Sports grows up
When Bill Allen arrived at Ridgefield High School in 1947, there were 36 students in the senior class, three varsity sports,  and one coach:  Allen himself. When he retired as athletic director 32 years later, there were more than 420 students in each class and 24 different sports being played.
“Much of the growth was in girls sports programs, which Allen was instrumental in incorporating at the high school,” said Tim Murphy, longtime Ridgefield Press sports editor.
William Walker Allen was born in 1919 in Rockland County, N.Y., graduated from Arnold College, and earned master’s from New York University. He served in the Navy during World War II and, for several summers, pitched in semi-pro baseball on Cape Cod.
When he joined Ridgefield High School’s physical education department in 1947 (he also taught science), the only interscholastic athletics were football, basketball and baseball — and the football was six-man. “I had to teach Bill how to play six-man football,” former student Fabio “Fibber” Biagiotti said at Allen’s retirement dinner in 1979. “He only knew 11-man.”
As a coach, Allen was  very successful, especially at baseball. During the 1950s his baseball teams won five straight Fairfield County Class B League titles, with Allen using a platoon system to make sure everyone played. The 1966 baseball team went undefeated, winning 15 straight games.
While he was better known for his high school coaching, Allen was also working with younger players. He was one of the founders of Ridgefield Little League, and served as its first president.
“Baseball was his forte, absolutely,” said Bob Mark, who succeeded him as director of physical education at the high school. “He won about seven championships when we were in the WCC He was a great sportsman, great guy. An outstanding person.”
As a proponent of female sports,  such programs as girls volleyball, girls track and girls tennis were established at the high school.
Allen gave up coaching football and basketball in the early 1960s to focus on the increasing administrative duties of the athletic director’s job. He did continue coaching baseball until 1972. “Coach Allen’s greatest contribution was in overseeing and cultivating the growth of the Ridgefield High athletic program,” Murphy said.  “During his years, RHS sports went from the minors to the majors, as the number of players and teams skyrocketed.”
Ridgefield, which had become a power in the Western Connecticut Conference, joined the Fairfield County Interscholastic Athletic Conference in the early 1970s.
“In Coach Allen’s 30-plus years, Ridgefield High sports grew up,” Murphy said.
After he retired in 1979, Allen moved to Rhode Island, living there until shortly before his death in 1993 at the age of 74.


An avid fly fisherman, Allen also owned property in Canada where he regularly fished with some of the best anglers in the region. His skill with a fly rod was enough to get him featured on the cover of Field and Stream magazine more than once. One of his fishing buddies was another old baseball player, named Ted Williams.