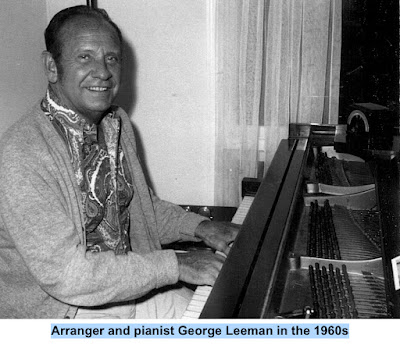 George B. Leeman Sr.:
Music for Kids and Stars
When George B. Leeman was only two years old, he astonished family members by picking out tunes on a piano. “By the time his fourth birthday rolled around,” The Ridgefield Press reported in 1962, “he was ready for a recital.”
Born in 1907, the Oklahoma native studied music at the University of Oklahoma and went from there to RKO studios in Hollywood where he worked on RKO’s “Hollywood on the Air” radio show.
However, he soon wound up in New York, working CBS radio and later television as a composer and arranger for the likes of Frank Sinatra, Perry Como, Dick Haymes, Paul Whiteman, Andre Kostelanetz, Archie Bleyer, and, for 12 years, with Arthur Godfrey.
For Godfrey, Leeman prepared music for the daily show, as well as Godfrey’s weekly Talent Scout program. He served on the audition committee for the latter, and was involved in the auditions of many future stars, including Eddie Fisher, Wally Cox, and the McGuire Sisters. 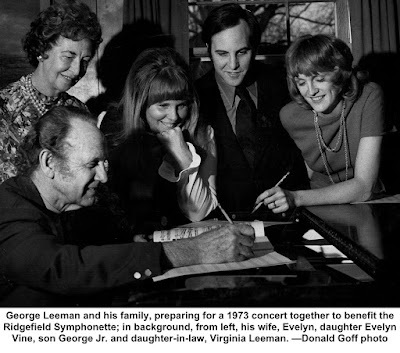 A Ridgefielder since 1942, Leeman was instrumental in the founding of the Ridgefield Symphonette in 1964, and aided its growth into the Ridgefield Symphony Orchestra, one of the top small orchestras in the country. (His son, George Jr., has also been a leader in the orchestra, and wrote the program notes for many years.)  When it gave its first concert in April 1965, the symphonette consisted of 24 musicians, 13 of them residents and only seven of them professionals.
“The reason for our existence is to provide the best possible entertainment for the people of Ridgefield who enjoy music of this calibre,” Leeman said in a 1972 letter to The Press.
After his retirement from CBS in 1959, Leeman gave private piano lessons to Ridgefield youngsters.  He also composed and arranged many songs and musical programs that were performed by children in the Ridgefield elementary schools, where his wife, Evelyn, taught for many years.
“Music,” he said, “is a therapy. Most children find something in music that relaxes them.”


Leeman died in 1978 at the age of 70. Two weeks after his death, the Board of Education named the auditorium at Scotland School “the Leeman Room” in his honor.