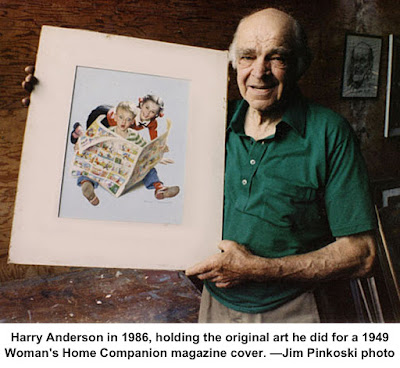 Harry Anderson:
Golden Age Artist
After Harry Anderson died in 1996 at the age of 90, one observer called him “the last of a generation of illustrators from the Golden Age of magazine illustration.” For more than 60 years,  Anderson's work embellished scores of magazines, including Saturday Evening Post, Redbook, Collier’s, Cosmopolitan, Good Housekeeping, and Ladies’ Home Journal.
Magazine picture were only part of his huge artistic output, however. After a religious awakening in the early 1940s,  Anderson devoted part of his painting talent to religious art, and became noted for his depictions of modern-day scenes in which one of the characters is Jesus Christ.
Born in Chicago in 1906,  Anderson started out as a mathematics major at the University of Chicago. As an escape from his math studies, he took an art course and discovered his talent for drawing. He transferred to the Syracuse School of Art, graduating in 1930, and headed for New York.

Within a year, Anderson had begun selling work to magazines, and by 1937, was much in demand by both magazines and advertising agencies — he worked on many ad campaigns, such as the Coca-Cola Santas and the Exxon (then Esso) “Great Moments in American History.”
For a children’s book in 1945, he painted “What Happened to Your Hand?”, a contemporary scene with a child sitting on Christ’s lap pointing to the crucifixion wound on his hand. The picture touched 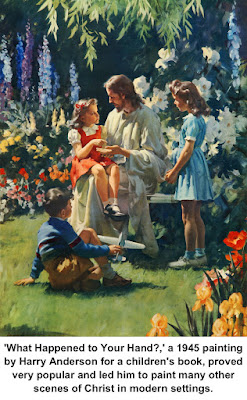 so many people that he did scores of other paintings that showed Christ in the present-day settings.

Although he was a Seventh-Day Adventist, he produced many paintings for the Mormons, including several large murals for the Temple in Salt Lake City.
Over the years he earned many awards for his work, and was inducted into the Society of Illustrators’ Hall of Fame. He was the subject of the biography, “Harry Anderson: The Man Behind the Paintings,” published in 1976.
Anderson was also a skilled craftsman and his hobbies included carving birds, making furniture,  building model ships, and even hooking rugs.
He and his wife, Ruth, moved to Old Branchville Road in the 1950s, and he lived here the rest of his life.
“He was a very modest man,” said Ridgefield-born artist Bob Crofut, who studied under  Anderson. “He wasn't for touting himself. But he was one of the best American artists — I'd put him right up with Remington.”
Jim Pinkoski, an avid fan of Anderson, has created a website, HarryAndersonArt.com, which contains hundreds of examples of Anderson’s magazine, advertising, and religious work.