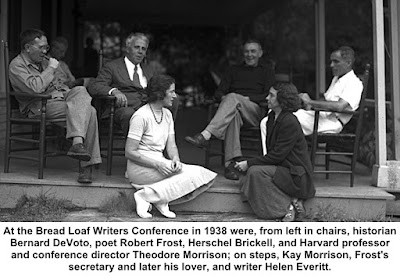 Herschel Brickell:
Ill-fated Editor & Critic
When he was a child, Henry Herschel Brickell was an omnivorous reader, consuming one or two volumes a day during his summer vacations. He was, he said later, “unwittingly preparing myself for the book reviewer’s life in New York.”
The Mississippi native was born in 1889,  graduated from the University of Mississippi, and fought in the Mexican war in 1916 with the National Guard. He was a newspaper reporter and editor in the South, and came to New York in 1919 to work for The New York Post as a news editor, then book review editor.
He later became general manager of Henry Holt & Company, where among the writers he worked with was poet Robert Frost — with whom he later taught at the Bread Loaf Writers Conference. Over his long career, he worked with and encouraged a number of young writers, including Eudora Welty.
In the 1930s, he wrote book reviews for The New York Times, New York Herald Tribune, and the Saturday Review of Literature. One of the books he favorably reviewed was Margaret Mitchell’s classic, “Gone with the Wind,” published in 1936.
Herschel Brickell was so taken with Mitchell’s book that he traveled south to meet with the author that summer, and they became friends, corresponding for some years. In one letter to Brickell, Mitchell mentioned the difficulty she had in writing about the aftermath of the Civil War. “War can be made interesting, and peace, a muddled peace, is hard to handle,” she wrote. “I suppose it’s because war has some design to it and reconstruction hasn’t.”
Mitchell visited Brickell in Connecticut at least once, which may have sparked the once-popular local rumor that a portion of  “Gone with the Wind” was written in Ridgefield.
In 1941, Brickell became editor of the annual O. Henry Memorial Short Story Prize anthologies.
An assignment in Spain in the 30s left him with a love of things Spanish, and he became a senior cultural relations assistant to U.S. Ambassador Spruille Braden, and later was chief of the State Department’s Division of Cultural Cooperation for Latin America. 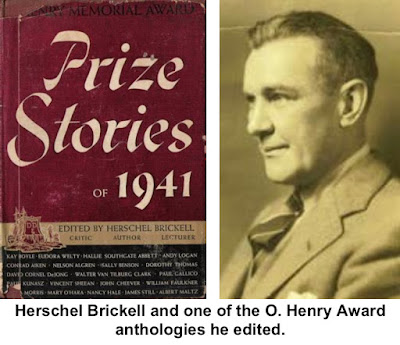 He continued to write and edit here until one June day in 1952, at the age of 63, something went wrong. He and his wife, Norma, had recently returned from a South American tour of several months and were hard at work together on preparing the 1952 O. Henry anthology. Norma wondered where her husband had gone, went to the garage, found the door closed, the car running and his body inside. He left no message.
“Hard work and a tendency to despondency were the reasons suggested by police and physicians to account for Mr. Brickell’s death,” The Ridgefield Press said.
Although he traveled widely and associated with many of the finest writers of 20th Century America, Herschel Brickell still found time to write a regular column for The Ridgefield Press — often posted from overseas. They were written in hand and in one undated submission from the 1940s,  soon after Ridgefield voted to buy the Lounsbury estate and turn the mansion into a community center, Brickell offered “a message from beyond”:
“Again, the shades are going to rest in the Elysian Fields, but they will be back soon. A message has been received from Benjamin Franklin in the meantime, expressing his delight in the fine work done on Lounsbury manor, the kind of community effort Benjamin likes. Also, he sees in it the hope of the eventual realization of his dream for the manor, now looking like a still, white elephant. He insists it can be made into the finest community house in this part of Connecticut, or New England, for that matter, and he asked me to say that the dream should not be forgotten. If enough people come to believe in it, it will, of course, come true, and there would be rejoicing in the Elysian Fields if it did, not to mention Ridgefield and the surrounding territory.”


The Elysian Fields were the final resting place of the souls of the heroic and virtuous.

Thanks for the article on H. H. Brickell. I've been researching him as part of my research into the history of the Mobile Register, where he was the telegraph editor in 1914. If you like, I can send you an image of him from the paper at that time with other staff.