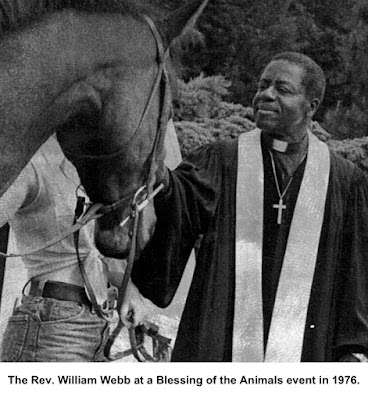 The Rev. William Webb:
Fighting Racists and Racism
The Rev. William Webb’s first realization that American society had different things in store for white men than it did for black men came when he was in high school in New York, where he was born in 1916.
“My cousin and I were sitting around the kitchen table talking about what we wanted to be when we got out of high school,” Webb told The Ridgefield Press in 1972. “My cousin said that he wanted to be a rural postman. I said I wanted to be an accountant.
“My father, who had heard us talking, said, ‘Where have you ever seen a black accountant?’”
That incident led him to become more aware of the condition of African-Americans  around him. Frustrated at the inequities in society, he decided to end his education after graduating from high school, and look for a job.
It was 1934, the height of  the Depression, and jobs weren’t easy to find. Webb wound up working on a poultry farm in Ridgefield, a black man in a community that has always been almost solely white.
“Most of the blacks then either worked in the service field or for the town,” Webb said. “There was no real middle class here. Nobody then would think of renting to black people. All were quartered in private homes.”
In the 1940s, one family — the Louis Browns, who had rented a house on southern Main Street for years — managed to buy that house from S.S. Denton; they were believed to be the first black homeowners in Ridgefield. (Webb and his wife, Delita, were said to be the third black, home-owning family when they bought their home on Knollwood Drive in 1966, just 50 years ago.)
Webb said Denton also owned Bailey Avenue properties that he rented to black families, giving them a chance to live here. “It was independence in a sense; the rents were within reach of the people.”
However, racism was evident in many other cases. “One light-skinned Negro woman moved into a vacant apartment on Main Street,” Webb recalled. “Several days later, the landlord found out she wasn’t white and asked her to move out, which she did.”
There were cases of blacks’ answering ads for rents, showing up and being told the place was already rented when it wasn’t.
“It is these kinds of barriers and handicaps that can become crippling over a period of years, not to mention disheartening,” Webb said.
In 1951 those barriers and attitudes sparked Webb and a group of Ridgefielders, both black and white,  to found the Ridgefield Branch of the National Association for the Advancement of Colored People (NAACP), an organization that remained active for many years — with Webb often serving as president.
One of the NAACP’s first efforts was to seek an end to local minstrel shows in which whites comically portrayed blacks. Advertising posters for the events, done by local school children, were very offensive to the black community.
“They depicted blacks with all the exaggerated and stereotypical black features,”  Webb said.
It was so bad that “black women would avoid the center of town during this time of year because of the embarrassment.”
Over the years the NAACP and Webb quietly handled cases of discrimination and abuse provoked by race. One of the saddest cases he cited involved a black man who was indirectly accused of making immoral advances to a white girl at a popular village store called Bongo’s. The charge was not made by the girl, but by a racist-minded employee of the store who saw the two laughing and conversing, Webb said. The employee filed a complaint with the police who arrested and fingerprinted the man.
Later the black man was subjected to cursing and intimidation as he’d walked to work — all for a fictitious crime, Webb said.
The case was thrown out of court. 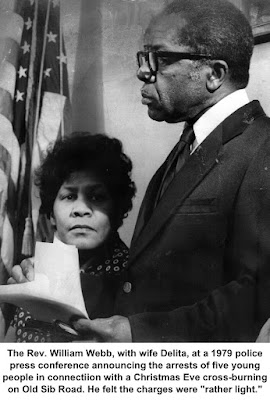 One racial incident Webb addressed gained national attention. On Christmas Eve in 1978, a cross was burned on the front lawn of an interracial couple who lived on Old Sib Road. Webb and the local and state NAACP pressed police for action, and three weeks later, five young men, aged 15 to 20, were charged with third degree criminal mischief and disorderly conduct. Webb spoke at the Ridgefield police press conference and while he praised the arrests, he felt the misdemeanor charges — determined by the court prosecutor, not the police — were “rather light” for a deed so vile. (The ringleader of the group was later convicted in both state and federal court cases, and spent time in jail.)
Webb eventually became active in the state NAACP and served for a while as its president.
In 1969, he was ordained a minister, and over the years served African Methodist Episcopal congregations in Danbury, Waterbury, Bridgeport, Norwalk, and Branford, all while still living on Knollwood Road.
In Ridgefield he was also active in leading efforts to bring affordable housing to town;  he often spoke at meetings to promote the need for lower-cost apartments. He served in the Ridgefield Clergy Association and on the board of directors of Danbury Hospital. A World War II veteran, he belonged to the American Legion and VFW posts.
What’s more, according to the testimony of people who knew him, Webb may have been one of the finest barbecue chefs in Ridgefield in the 20th Century.
He died in 1991 at the age of 75.


In all his handling of racial cases, Webb said he tried to deal directly with people and not through other agents or agencies. “It’s my way of life,” he said. “I try to understand a person’s character. If I know someone’s character, then I know how to handle the matter.”